The Rockies had not hung a loss on Clayton Kershaw in their last nine tries. They hadn't even beaten the Dodgers in a Kershaw start in their last six attempts. And the Dodgers' 23-year-old ace was coming off a gorgeous outing on Opening Day.

Good thing the Rockies have their own 23-year-old stud pitcher.

Jhoulys Chacin had the Los Angeles offense in a tight straitjacket all night. The Venezuelan tossed seven shutout innings, allowing five hits and walking two (one intentional). He located all of his pitches well, getting the Dodgers to pound the ball into the ground thirteen times. Three of those were weak comebackers. Only one Dodger advanced past second base. And Chacin didn't even have great command tonight.

So much for familiarity working in the Dodgers' favor. Chacin has now faced the Dodgers seven times, holding them scoreless in three of those starts. With seven shutout innings tonight, Chacin is now 3-1 with a 1.00 ERA (3 ER in 27 IP) in his last four starts against the Dodgers. Forget Brad Hawpe. TrueBlueLA has a new DodgerKiller to worry about.

Of course, there had to be offense. Clayton Kershaw was very, very good, as expected. He did make a couple mistakes. Troy Tulowitzki hit a home run to the deepest part of the ballpark to left-center on a fastball up and over the plate for his first hit of the season. Chris Iannetta turned on a fastball on the inside half of the plate for his 50th career home. Both were served to each hitter's particular powerhouse.

The two big flies were notable: Kershaw had allowed more than one home run in just 5 of 84 career starts before tonight. Jose Lopez added a two-out RBI single after Tulowitzki was intentionally walked to give the bullpen a comfortable lead.

Ty Wigginton started a brilliant double play and saved a run with a tough play on a two out chopper. Troy Tulowitzki dropped his token thievery in the hole vs the Dodgers. The bullpen retired all six men they faced.

It was as flawless and complete of a game as the Rockies could play.

Oh yeah. Why don't we revisit this quote?

"To win three playoff series, you have to have incredible starting pitching. And after [Ubaldo] Jimenez, that's not what they have." - unnamed NL executive 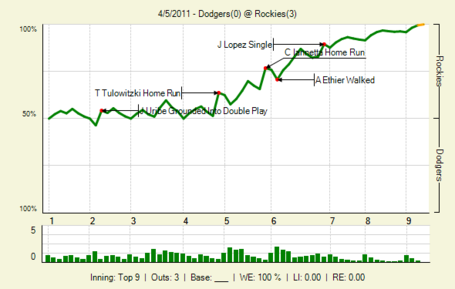