Rockies 7, Dodgers 5: Rockies Work the Count on Billingsley, Middle of the Order Produces

Share All sharing options for: Rockies 7, Dodgers 5: Rockies Work the Count on Billingsley, Middle of the Order Produces

A little fun fact before discussing the game: it had been almost four years and seven starts since Chad Billingsley had pitched less than five innings or allowed more than three runs against the Rockies.

Obviously that changed today, as the Rockies ran up his pitch count (86 in three innings), strung together hits, and unleashed some power with men on base.  If not for a fortunate strikeout of Dexter to end the third, with runners on second and third, the day would have looked even worse for Billingsley.

A lot of time was spent this winter talking about the lack of timely hitting in 2010, and the perception that individual batters popped up or struck out a lot in scoring situations.  Not too big of a problem here.   Especially impressive, the 3-4-5 hitters went 5-10 with two home runs, from Todd Helton and Troy Tulowitzki.  Yeah, Helton's barely cleared, but both homers came with at least one occupied base.  Both Huson and Frazier noted Cargo's patience in not swinging at the last two borderline balls to start off the third.  Lead-off Walks + Home Runs = Success (no cheap winning references here).

While the hitting came through early, Jason Hammel didn't have the best control.  As dependable as he has been from year to year, he's also been dependable on his opening days: four runs allowed in three of the last four years.  I was going to say something about him not being a top three guy, but I got distracted by him having allowed four runs in two of his last three opening starts. There'll  be days like this, and I'm just glad to see a win.

A lot of KBs were also used this winter to talk about Franklin Morales' future with the team.  Perhaps someone can chime in with the distance of the fly outs, but here's hoping that two Ks and no runs over two innings is the start of something good for Frankie and the team (or at least the start of him rebuilding value).

In all, it's nice to win a series early on to gain some momentum, and build the expectation that the team should win every series.  Even more than the long winning streaks in 2007 and 2009, that's what felt great about those years: the expectation that the Rockies should win each series.  The Rockies won their second and third series of the season last year, so I'm not proclaiming it a sign, but this team has the right pieces to win in a shutout or to overcome a shaky pitching outing.  Here's hoping for many more series wins. 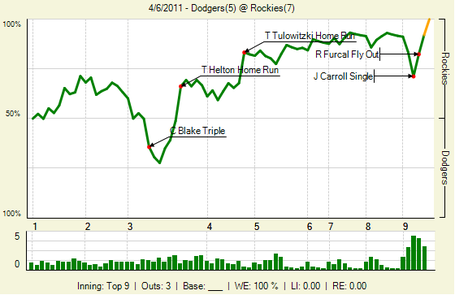 Someone will have to update with the Row Call.  My apologies to the game thread junkies for not knowing all the tricks. Updated, 9:04 CST 7:43 AM CST: I did not see the overflow link (oops), so here is a complete Row Call:

Nice work all around.