The road proved no obstacle for the Colorado Rockies today as they crashed opening day in Pittsburgh.

The offense got started early after a costly error from Pirates second baseman Neil Walker allowed the opportunity for two runs to cross in the first inning. A hot Troy Tulowitzki produced his third home run in as many games in the fourth, and ended up with three RBI on a productive day. After giving up four hits in the sixth, Pirates starter Paul Maholm gave way to the Pirates bullpen. The Rockies kicked out two more runs in the seventh off of reliever Chris Resop.

Tulowitzki, Dexter Fowler and Ryan Spilborghs each had multiple hits during the game, while only Chris Iannetta didn't produce a hit out of the starting lineup. The Rockies only struck out three times during the game, two of which came from the pitcher's spot.

The real star of the game was Esmil Rogers, who threw out the best MLB start of his career. After allowing a run on two hits in the first, Rogers retired 22 of the next 23 batters, allowing only a walk to Garrett Jones in the second inning during that period. That included a streak of 18 straight outs, which was broken up in the eighth inning on a single by Ronny Cedeno. Rogers struck out seven batters on the day in an efficient outing where he threw 95 pitches over seven and a third innings.

The game was interrupted in the top of the ninth by a game attendee on the field.

This was the first Rockies win of the 2011 that was not saved by Huston Street. The Rockies improve to 4-1 on the season.

Row call after the jump. 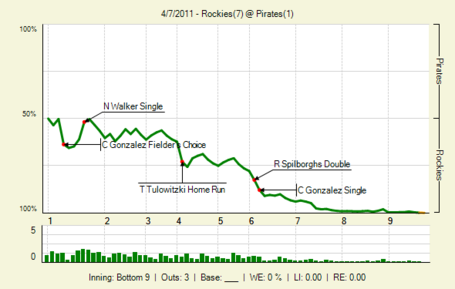