Share All sharing options for: Game 6 Recap: This stupid team

Everybody in the bullpen pitched. Everyone on the bench...did something.

This game took 5 hours and 11 minutes.

I can't even TELL you how many times they had runners on and failed to convert them.

The WORST offense was stranding Johnny Herrera at 3B after a leadoff double and advancing to 3B on a wild pitch. Seriously, runner on 3B, zero outs.

Stuff after the jump 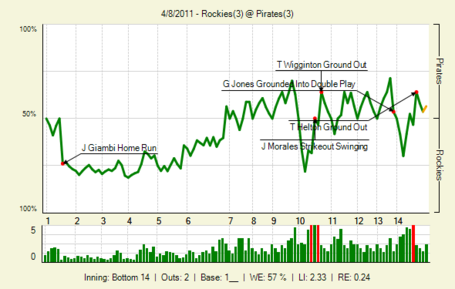 Guys who did stuff good:

Guys who did stuff bad:

Every other position player not named Giambi, Herrera, or Fowler.

THIS IS THE STUPIDEST GAME

Who knew that Muzia’s love is like a rock tied to your feet, dragging you to the bottom of the ocean? Some days, I feel like I’ve accidentally entered the Church of Tulowitzki on Baseball Easter. Serious Avs fan. Yes, I have health insurance. SB Nation Denver