Share All sharing options for: Fit to be Un-Tyed: Ty Wigginton's three run double propels Rockies to win over Pittsburgh

For awhile, the game was all too reminiscent of Friday night: the score was tied three to three, the heart of the Rockies lineup came up time and time again with men in scoring position and either failed to get them home or did so in the least effective manner possible (for example, Carlos Gonzalez grounding into a double play with no outs and a runner on third, on a 3-0 pitch, no less). So, when Troy Tulowitzki and Seth Smith struck out in back to back at bats in the eighth inning, with two runners on, none out and what was looking like the Rockies last, best chance of pulling out the win in this game slipping through their fingers, you could probably understand why some Rockies fans were despairing a bit. Then, after an HBP of Jose Lopez loaded the bases, the inexplicable happened: a Rockies hitter actually came through in a big way in late innings with the outcome of the game on the line. That hitter was Ty Wigginton, whose clutch three run double with two outs propelled the Rockies to a six to four victory over the Pirates. WIgginton was filling in for Todd Helton and finished the game with just the one hit, but at least it came when it counted.

Jonathan Herrera remains a mysterious on-base machine, walking three times and getting a hit. I'm not going to knock the weapon until it proves ineffective, and so far this season, Herrera's been extremely effective. He's matured relatively late as a hitter, and to this degree his prowess is certainly unsustainable, but he continues to show that he belongs on the big stage in the MLB. Herrera led off the Rockies eighth inning rally with a walk, scoring the go ahead run.

Dexter Fowler walked twice, scored twice and stole a base for the Rockies and Carlos Gonzalez went three for four, it just so happened that one time without a hit was particularly cringe inducing, but even that scored a run. In the negative column, Troy Tulowitzki again showed that maybe he chose the wrong Katy Perry song, with the Hot and Cold pattern continuing in frigid territory for the second consecutive night.

Greg Reynolds' last career victory was on June 17, 2008 as a 22 year old rookie against the Indians, he's going to have to wait a bit longer despite pitching well for the Rockies, limiting the Pirates to just two runs on three hits in six innings.

Ryan Doumit gave Rockies pitchers named Reynolds the most trouble tonight, hitting a two run home run off of Greg Reynolds to give Pittsburgh an early lead, and then a double off of Matt Reynolds in the seventh, eventually scoring to tie the game at three and costing G. Reynolds the chance to reappear with a W in the box score. Rafael Betancourt gave up a home run to Jose Tabata in the eighth for the Pirates fourth run. Matt Lindstrom pitched the ninth and earned his first Rockies save, filling in for the spent Huston Street. 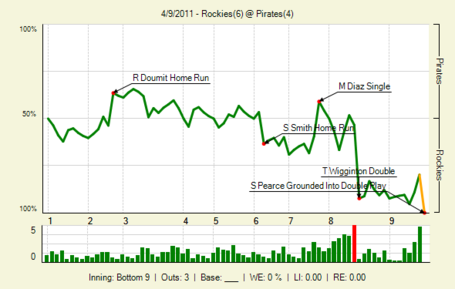