Share All sharing options for: Jimenez, Rockies Lose 8-4 to Pirates

We're still waiting for Ubaldo Jimenez to get his first win of 2011. Jimenez went only four innings today (and 88 pitches), giving up six hits and four runs, walking four and striking out six with a club record-tying three wild pitches to get the loss (0-2). After four starts, Jimenez's ERA sits at 7.20.

Esmil Rogers entered the game in the fifth with the Rockies down 4-2, ostensibly to provide long relief. Instead, he tossed gasoline on the game and lit a match, giving up four more runs on four hits and two walks in the inning to give the Pirates a 8-2 lead. Charlie Morton took the win for Pittsburgh (3-1).

Offensively, Dexter Fowler and Todd Helton had multi-hit efforts, with both gentlemen driving in runs. Fowler's two run double in the sixth cut it to 8-4 and briefly give us hope. Even with the loss, the Rockies are 17-9, four games clear of anyone else in the NL West, and they won the season series against the Pirates, 4-3. 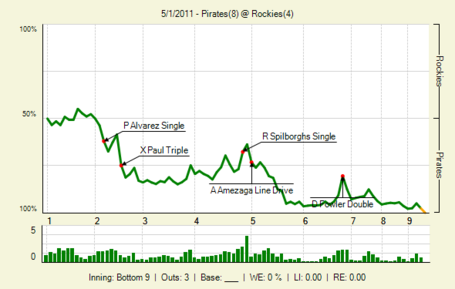