I have been criticized more often of being biased in favor of Chris Iannetta than any player I have ever written about. It isn't that I actually believe he's an All-Star caliber player longterm or a franchise centerpiece. He isn't even that great of a hitter. He still strikes out way too much. He's a mistake hitter who hits a ball in his wheelhouse a long way but is as hopeless as any against a well executed pitch. 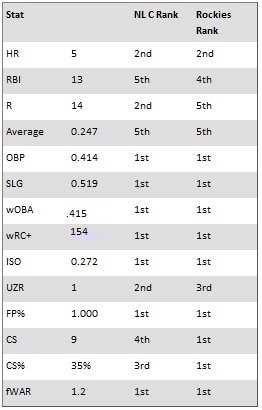 My defense of the Rockies' catcher was not as much a defense of Iannetta as much as it was a criticsm against the popular critical rationales against him - incorrectly judging his walks with RISP, overrating batting average, and FISTPUMPZ. As a role player, he has been more than fine. I say that with no emotional ties but a heavy constant reminder of a slew of statistics.

In fact, he has been more than fine this season. Christopher Dominic Iannetta has been All-Star caliber in 2011, and he has been the Rockies' best hitter this season. Take your pick of traditional or sabermetric statistics (right) - his 2011 campaign has become impossible to ignore.

At this point in time, there is no conceivable argument to say Iannetta does not deserve to be at the All-Star Game if voting ended today. He is clearly Colorado's best hitter and almost certainly the best overall catcher in the National League.

He has a six game hitting streak and has a hit in 8 of his last 9 starts. He walked twice in the other game. He has reached base at least twice in 7 of 10 games, homering in two of the outliers. He has pelted a roundtripper in the Rockies' last three victories (they are 4-1 when he goes yard).

How has he done it? Thomas Harding and Nick Kosmider have the answers:

Iannetta has made several mechanical adjustments at the plate. He has focused on moving his hands into position during his startup. The result has been a softer landing of the front foot, which allows Iannetta to better cover the strike zone.

The result has been a line drive rate much higher than we have seen from him since 2008, a career-high HR/FB rate and a near career low fly ball rate. This is precisely what we have been waiting to see from the Rockies' catcher.

In fairness, I must point out this article does cherrypick beautifully the timing of his hot streak against the rest of the ice cold line-up. I do not trust he will keep this up (and in terms of Rockies' rankings, I hope to god those change). He will cool off and almost certainly fall down the leaderboard by July. But the man deserves his due, especially when he is the only one in the line-up producing. If he continues anywhere near this rate, it might make for an interesting off-season debate regarding Iannetta and Wilin Rosario.

Take the jump for several articles on players who are not hitting.

Rocky patch: Troy Tulowitzki all baseball, all the time - USATODAY.com
Bob Nightengale touches on the slump of Tulowitzki, painting a picture of a man obsessed with baseball, almost to the point of annoying his friends and teammates.

"He's so tough on himself, he drives himself absolutely crazy. He puts so much pressure on himself - mentally and physically." - Evan Longoria

"All I can say is, thank God I had a TV in my own room. All Tulo did was watch baseball and sports. I had to break away and watch a movie once in a while. Baseball doesn't have to be 24 hours." - Jason Giambi

Krieger: Stewart's time is almost up - The Denver Post - It seems a little silly to say that Stewart's tenure in Colorado is reaching an end when you consider his past performance and that of the rest of the Rockies' third baseman. Then again, his historically paltry batting line is hard to ignore as well. My take - there is no reason to "cut bait" with him before June given Colorado's stable of hot corner tenders.

Stuck With Stewart | FanGraphs Baseball
Matt Klaassen touches on the Stewart conundrum, suggesting the best course of action is to play him exclusively for a while.

Fowler continues to baffle: high strikeouts and walks - The Denver Post - I'm not sure why this is so baffling to Jim Armstrong. Fowler swings at just 20.4% of pitches, one of the 20 lowest rates in the majors. More pitches equal more chances to walk....and to strikeout.

Rockies' Gonzalez looking for answers - The Denver Post - It hurts enough when your cleanup hitter is struggling. It is that much harder to deal with when your 3-hole hitter is hitting even worse.

"No, I don't feel comfortable. I haven't felt comfortable, but I will. I'm just trying to find it. And when I find it, I won't lose it." - Carlos Gonzalez