Troy Tulowitzki broke out of a bit of a funk, hitting an opposite field home run in the second inning.  Two batters later, Seth Smith unloaded his third home run of the season into th bullpen.  In the sixth inning, Carlos Gonzalez hit his third home run.  Jason Hammel battled through seven innings in spite of control problems and an injury.  He was  was solid overall, allowing seven hits and striking out five.

That should be enough to beat the Mets at home, but it wasn't tonight.  For the second straight Tuesday, the Rockies would lose 4-3.

After retiring ten straight, Hammel was struck on a line drive by Ronny Paulino with two outs in the fourth.  The hit might have turned into a ground out; instead it became a two out hit.  Perhaps rattled, Hammel walked the 8-hole hitter, then foolishly piped a fastball down the middle of the plate to pitcher Mike Pelfrey.  Pelfrey swung and connected for his first hit, a two run double.  On a night where the Mets were not threatening often after the first innings, that hurt.

On the offensive side, Colorado managed just three hits other than those long balls.  Todd Helton singled twice, and Hammel himself turned a get-me-over fastball into a single.  That's it.  The Rockies do lead the league in come-from-behind wins with 13, but there would be no base-runners against the Mets bullpen tonight, much less runs.

Dexter Fowler fouled a the first pitch he saw after a 50 minute rain delay off his left knee and left the game.  If he has to go on the disabled list, there might not actually be a roster move.  Ty Wigginton is eligible to return from the disabled list Friday, and Alfredo Amezaga can play center field.  If a move is made, Eric Young Jr. would figure to be the most likely candidate to get the call, followed by Willy Taveras...Currently, the Giants and Diamondbacks are scoreless in the ninth inning. 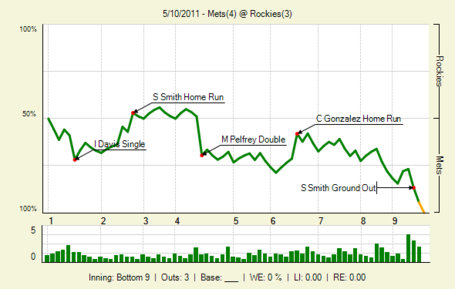