Fan Confidence and the Offense

Share All sharing options for: Fan Confidence and the Offense

Even with the struggles of Ubaldo Jimenez and Esmil Rogers, the Rockies pitching staff has excelled this season, putting up the 11th best ERA in MLB, no small feat given their home venue.  The rotation has had a strong ERA of 3.00 since April, a span in which the pitching staff as a whole has a 3.42 ERA.  And yet the Rockies are just 3-8 in that timeframe.  No, it isn't the pitching that causes handwringing around these parts anymore.  At least it shouldn't be.

It is the offense, the unit that has failed to exceed 6 runs in any of their last 16 games, the group that has the 4th worst wRC+ in the majors at 81, the squad that can hit three home runs and score just three runs.  To say that fan confidence in the offense is waning would be an understatement.  I could probably write a book about surviving a stroke induced from watching the ineptitude of the offense. Maybe I have already. 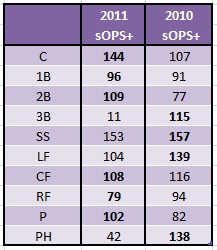 The Rockies need to improve with the bats.  At what positions is the question.  Third base has been covered a great deal already, but the other positions haven't been explored much.  I compiled the team's sOPS+ at every positon for 2010 and 2011.  sOPS+ is simply OPS, then scaled to 100, park factored, then adjusted for the position relative to league.  So any number over 100 means the Rockies are better than the rest of the league at that position.  The table can be found at the right, and I have emboldened the positions I believe the Rockies have improved from last season.

Without a doubt, the Rockies actually have improved upon 2010 at four positions - catcher, first base, second base and pitcher.  They have fallen apart at pinch hitter, third base and left field.

The remaining positions require context.  While it shows only a slight decrease at shortstop, one must remember Clint Barmes started 39 games there in 2010, dragging that number way down.  While CF and RF show decreases, recall that Carlos Gonzalez had over 400 PA at those two positions in 2010.  Dexter Fowler and Seth Smith, the regular starters at those positions now, are hitting better than they did last year.  Judgement call here says those two positions are effectively improved.

So with two exceptions - third base (which has been talked to death) and pinch-hitters (which could use another post) - the offense has held steady or improved upon 2010 across the board.  The regression of this offense is due mostly to LF and SS....Carlos Gonzalez and Troy Tulowitzki.

The company line will always be "These guys will hit."  And sure, they probably will, but what if they don't?  For the most part, they haven't.  Today's game is #35 on the season, 22% of the way through, and the dataset is sneaking up on a noteworthy sample.  Turning it around is not a given.  Aside from Albert Pujols, even superstars have down years, and it is possible CarGo and Tulo will have one this year.  The Rockies need both to hit to win the division.  Just how confident are you that they will find their stroke before it is too late?