Things still aren't connecting for the ever-frustrating Ubaldo Jimenez. Though pitching in the cold has never exactly been his strong suit, he's lost command of key pitches and struggled through 3 and two thirds innings with 3 hits and 6 walks (two of which were opposing starting pitcher Jon Niese) and allowing 5 earned runs during that time.

After a 2+ hour rain delay, the Mets got started early. as Jimenez walked third baseman Willie Harris before over-adjusting for the shaky control with a straight fastball to Carlos Beltran, who smacked it for a home run, putting the Rockies into another early deficit. Jonathan Herrera retaliated in the bottom of the inning with a solo shot (the Rockies weapon of choice as of late), his second home run of the season, both of which came against the Mets.

The next major crisis didn't arrive until the fourth inning. Left fielder Jason Bay led off the inning with a single, and though Bay stole both second and third base, Jimenez helped things along regardless by walking first baseman Daniel Murphy and second baseman Justin Turner behind him. A sacrifice fly from catcher Josh Thole brought the first run around, but it was a two run single from shortstop Jose Reyes that broke the door open. Jimenez was relieved by Clay Mortensen, who picked off Reyes as he attempted to steal second to end the inning.

Once again, the Rockies retaliated in the bottom of the inning with a solo home run, this time by Todd Helton. The score would remain the same as Mortensen and Niese pitched effectively through the next two innings. Mortensen, who is hypothetically scheduled to start four days from now against the Giants, was relieved by Franklin Morales in the seventh inning. After two quick outs, Morales lost form and matched Jimenez' first inning mistakes with another walk to Harris followed by another home run by Beltran.

The Rockies offense finally came to life in the bottom of the seventh. Jose Lopez, Jose Morales and pinch hitter Alfredo Amezaga hit three straight singles, netting the Rockies a run and knocking Niese out of the game. Seth Smith knocked in two more with a double off Mets reliever Michael O'Connor, who later walked Carlos Gonzalez (his third walk of the game), leading the way to former Rockie Taylor Buchholz. Due to the "All-Ex-Rockies-Are-Untouchable" clause, Troy Tulowitzki was only aloud to hit the ball but not let it fall for a hit; Jason Bay was positioned perfectly in deep left field to make the catch despite solid contact.

After a solid eighth inning of relief from Matt Belisle, the Rockies offense picked back up against Jason Isringhausen. Todd Helton walked after a ten pitch at bat, followed by the second hit of the game for Ryan Spilborghs. A bruised Dexter Fowler could come in to bunt the two runners over, which he did successfully, but a strikeout from Jose Morales and a flyout from pinch hitter Jason Giambi prevented any further offensive production.

The unstoppable force of Carlos Beltran put another nail in the Rockies coffin with his third two run home in in the top of the ninth off of Matt Lindstrom. Mets closer Francisco Rodriguez would finish the game in favor of New York, the Rockies eighth loss in ten games and ninth straight in Jimenez starts. 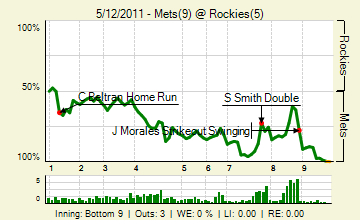