Share All sharing options for: Game #36 Wrap: Who Are These Guys and What Have They Done With the 2011 Rockies?!

Tonight was a breath of fresh air after breathing the exhaust of a team trying to drive on the highway and pushing the pedal to the metal while stuck in 2nd gear.

The offensive push started in the first, after leadoff man Seth Smith singled and Jonathan Herrera walked. Carlos Gonzalez then grounded out 3-6, pushing Smith to 3B and putting Herrera out at 2B. Cargo made up for the potential DP ground ball by taking the same opportunity out of Troy Tulowitzki's hands and stole 2B before Tulo's single drove him and Smith in. Tulo then stole 2B himself, and was driven in off of the bat of Todd Helton. 3-0 Rockies. Ty Wigginton then popped out in his first AB off of the DL, Ryan Spilborghs singled, Chris Iannetta took one of his patented walks, and then Jorge De La Rosa grounded out to 3B to end the inning.

Yes, the Rockies managed to bat around in the fashion that scores the fewest runs - the kind where you leave 'em loaded. Naysayers, at this point, expected that 3-run rally to be the end of the scoring, leaving DLR to twirl a gem.

But the Rockies weren't done hitting.

The Padres didn't make it TOO easy though, as they notched another 6 runs over the course of the game.

In an evening where interim Ace Jorge De La Rosa had FAR from his best stuff (3K, 3BB, 5ER over 5 2/3 innings), the offense finally stepped up to the plate and made it sure that the Rockies would come away with the W, despite some shaky pitching.

The only starter without a hit for the Rockies tonight was catcher Chris Iannetta, who went 0-for-4 with a BB.

40,278 turned out on this pleasant Friday night to watch some old time Coors Field baseball. 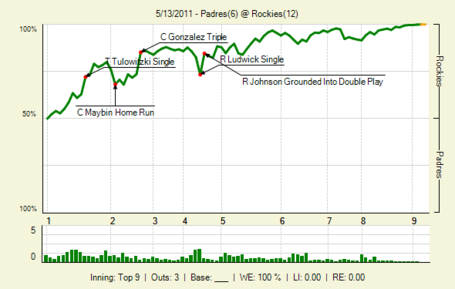 Amusingly enough, the highest WPA for a batter tonight was Padres CF Cameron Maybin, who went 4-for-4 with 2 bombs, 3 runs and 3 RBI. The only Rockies home run hit was by Troy Tulowtizki in the 4th, and you guessed it, it was a solo shot.