Rockies feast on Padres pitching early, but give it all back as Brad Hawpe has his revenge

Share All sharing options for: Rockies feast on Padres pitching early, but give it all back as Brad Hawpe has his revenge

Brad Hawpe has seen his share of games turn quickly at Coors Field, and has even played his part in a fair number of them. For all of those prior to Saturday afternoon he was wearing a Rockies uniform, but on this rain soaked day he played the part of spoiler in a Padres uniform, launching a ninth inning, two run home run to cap a Padres comeback 9-7 victory over a befuddled Rockies team that disappeared about halfway through the contest.

Early, on it looked good as the Rockies shot out to a 7-1 lead. Todd Helton and Carlos Gonzalez hit home runs. Troy Tulowitzki and Seth Smith lined laser doubles. Jonathan Herrera and Chris Iannetta did their getting-on-base and keep-the-offense-chugging-along things and the Rockies starting third baseman even added a pair of hits and an RBI. This well oiled machine is the way that the Rockies envisioned their 2011 offense running during the off-season, only a couple of the parts are a bit different than they likely intended. Ty Wigginton notably has stepped up to grab the reins for the third base position where Ian Stewart and Jose Lopez let them go in several shots already.

For Helton, the home run continues his extra base hit resurgence, the bomb was his fifth of the season already, not quite a quarter of the way in, and his 14th extra base hit a season after he collected 27. For Gonzalez, it continues what's quietly turning into a very solid month of May, as he's showing the type of power that made him an MVP candidate last season, and adding in pitch selection with a new, more patient approach.

Jhoulys Chacin pitched masterfully for six innings before losing his command and concentration in the seventh inning. Two walks, a single and a two run two error mistake given up in that frame marred what had been a one run, four hit allowed effort before that. Matt Lindstrom came on in relief and allowed two more runs to score before finally closing the inning with the Rockies still ahead by two. Rafael Betancourt couldn't perform any better in the top of the eighth, allowing the Padres to tie the score.

The Rockies at first survived one close call in the ninth, when a leadoff double given up Huston Street to Will Venable proved for naught. Venable was sacrificed to third and then on a Jorge Cantu grounder was called out at the plate thanks to the defense of Wigginton at the hot corner and Iannetta blocking the plate, and Colorado was an out away of pushing the tie game to the bottom of the ninth. A couple of pitches later, however, Hawpe would make that play futile with his two run bomb, driving in Cantu and providing the margin of victory.

Where the Rockies late inning pitching was a leaky ship that couldn't sink fast enough, the Padres' remained airtight and secure. After Colorado chased San Diego starter Aaron Harang one out into the fifth inning, Four Padres relievers came on and combined for four and two thirds innings of perfect, no hit, no walk baseball to allow their offense to get back in the game and eventually take the lead.

The series now tied at one apiece, the two teams will play the rubber match tomorrow afternoon. 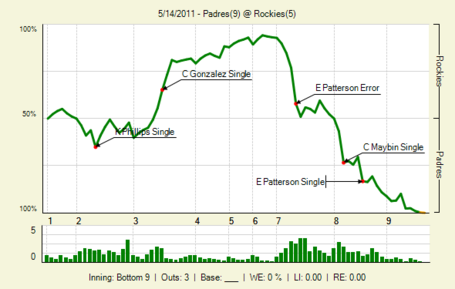