This is going to be one of those good news bad news recaps. You know, the ones I only write because the Rockies have suffered another bad loss and I need to find some positives to highlight. Which is to say that there weren't a whole lot of positives.

Good news: When Hammel left the game the Rockies were only down 4-2 and still had a decent chance of getting back into the game.
Bad news: Hammel left the game. Meaning, firemen (only in the Bradbury sense) Franklin Morales and Felipe Paulino doused the Rockies' chances of winning the game in gasoline, lit it on fire, then danced on them. In fact, there were 3 straight Padre hits on 3 pitches from 3 separate pitchers that drove in a total of 4 runs. Just for good measure Brad Hawpe added a RBI single to make it 8-2. Coming into the game, Rockies relievers were sporting a 6.00 ERA in May. So...not good.

Good news: Todd Helton hit a solo shot (6) for the second game in the row. Also, he is on my fantasy team.
Bad news: There needed to be like 6 guys on base for this to matter much. I'm pretty sure that's impossible.

Good news: The Giants were rained out, meaning that the Rockies only lost a half game in the division (1.5 GB total). The Rockies can retake the lead with two home wins tomorrow and Tuesday.
Bad news: With the loss, the Rockies dropped to 20-18, 3-10 in May, and have lost 5 series in a row. The pitching matchups for the Giants series are now Mortensen/Lincecum and Jimenez/Sanchez.

Other sundry items after the jump. 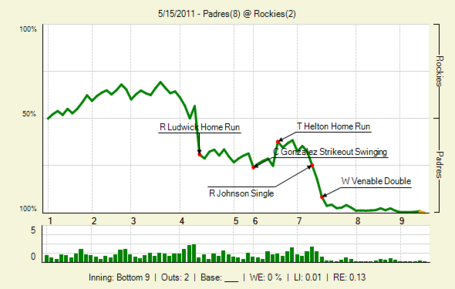 SDcat09 had 4x the posts of anybody else.