Clayton Mortensen went six innings and allowed four runs on seven hits and two walks while striking out four. He was pretty darned good until his last inning, when he allowed soul-crushing home runs to Andres Torres and Nate Schierholtz. It was certainly a valiant effort for a seventh/eighth starter going up against a two-time Cy Young Award winner, but it just wasn't enough as the offense wasn't able to get back in it after getting a couple of runs off of Tim Lincecum early.

Nope, that's not right....how about this:

Despite being given a late three-run lead on the strength of seven runs on nine hits and six walks from the offense against one of the league's best pitchers, the Rockies' bullpen imploded once again, sending the club into even more of a downward spiral in another vomit-inducing loss to the Giants.

That doesn't sound right either...

Screw all that - this time, the Rockies won. Clayton Mortensen BEAT Tim Lincecum. The Rockies finally hit a home run with somebody on base (Carlos Gonzalez's big three-run shot in the sixth off of The Freak). And, the bullpen held the lead with relative ease, although Matt Lindstrom had to get a huge strikeout of Pat Burrell to get out of the eighth unscathed. And perhaps the best part? We finally saw a little bit of that Coors Field magic that has been MIA so far in 2011.

Graph and roll call after the jump... 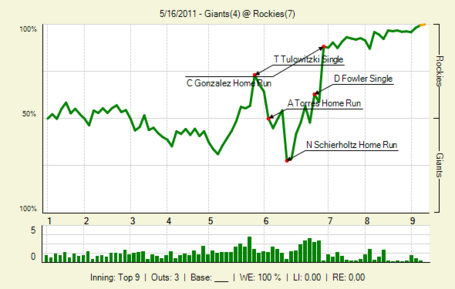