Rockies 5, Giants 3: Back in First Place

Share All sharing options for: Rockies 5, Giants 3: Back in First Place

For most of the afternoon, it appeared as if the Rockies would be taking silver linings and moral victories away from today's game.  They will happily take a series sweep and NL West division lead instead.

In many ways, Ubaldo Jimenez was markedly better than we have seen him.  Since returning from the disabled list, Ubaldo had not gotten more than six ground outs.  Today, he got nine.  He had not gotten fewer than five fly outs.  Today, he got three.  His best strikeout total was seven, which he matched.  The fewest number of walks he had permitted was two.  Today, just one free pass.  He had not pitched more than 6.0 innings today.  Today, he worked seven.

His velocity still hasn't returned, his control and command still aren't totally sharp (62% strikes) and he still lacks confidence on nearly all six of his offerings.  His outing was reminiscent of an unsure talented rookie - at times brilliant, at times ominously lost - but ultimately, his outing was undoubtedly a step forward.

Having seen Ubaldo twice this season, San Francisco clearly had a plan to be patient and swing only at strikes.  Consequently, the Giants found themselves in hitter's counts often and rapped out eight hits (a season high) against Jimenez.  One run crossed on an Aubrey Huff double to left and a Miguel Tejada singled punched to right field.

After Troy Tulowitzki homered to tie the game, Ubaldo appeared to settle down initially, getting two quick outs in the third.  But after two soft line drive singles, he came unhinged, throwing three consecutive balls to Pat Burrell before the Giants unleashed a 2-RBI double on a 3-0 fastball down the middle.

That 3-1 deficit held until the eighth inning with Jonathan Sanchez pitching very well.  Known for control problems, the Rockies' game plan of being patient backfired as the lefty threw just 27 balls on the day.  The offense didn't sleep for long though.

Ryan Spilborghs and Chris Iannetta both singled to start the eighth, their second hits of the day, and Alfredo Amezaga came in to bunt.  Bruce Bochy left Sanchez (who can lose his composure) in for the bunt attempt, and Sanchez threw the ball low down the right field line.  With runners on second first and third with no outs, Dexter Fowler worked a nine pitch at-bat and drove an opposite field ground-rule RBI double to tie the game, and Carlos Gonzalez singled home two to finish off the rally.

Matt Belisle worked the top of the eighth for his fourth win, and Jonathan Sanchez was charged with his third loss. 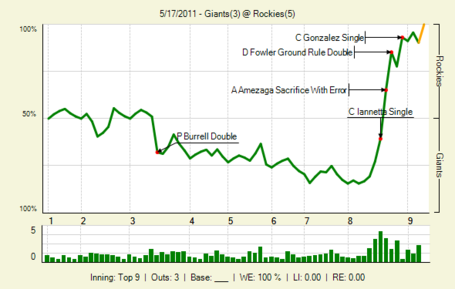