Share All sharing options for: Crossed signals lead to Rockies 2-1 loss in Philly

Jorge De La Rosa pitched another gem, but costly mistakes on both offense and defense derailed the Rockies chances to beat Cole Hamels and the Phillies in Philadelphia on Wednesday night.

Both starting pitchers dominated for most of the game, the key difference being that when Jorge De La Rosa got into trouble, it got compounded by wildness and miscommunication with catcher Chris Iannetta, while when Phillies starter Cole Hamels got into trouble, his life was made easier by the Rockies running into outs on the basepaths, particularly in the first two innings.

In the first inning, a walk to Alfredo Amezaga and subsequent single by Carlos Gonzalez seemed a promising start with one out, but third base coach Rich Dauer underestimated Phillies right fielder John Mayberry's throwing arm, and Amezaga was out easily trying to stretch for third. In the second, Ryan Spilborghs was caught stealing second, the 13th time the Rockies have been caught this season in 39 attempts.

Despite these early miscues, brilliant pitching by De La Rosa kept the Rockies in the game. JDLR reeled off four scoreless innings allowing just one hit in 44 pitches before running into trouble in the fifth. A Raul Ibanez single was exacerbated when De La Rosa plunked Carlos Ruiz, and then Iannetta allowed a passed ball to move both runners up a base. A single by Wilson Valdez scored Ibanez for the first Phillies run.

The Rockies rallied to tie the game at one apiece in the seventh when Gonzalez and Todd Helton both hit doubles, but the Phillies struck back an inning later, when Valdez singled, moved up one base on a bunt, another on a wild pitch, and scored on a sacrifice fly to right field.

The Rockies had a chance to tie the game in the ninth inning, when Seth Smith led off with a double off Phillies closer Ryan Madson, but the heart of the order (consisting of Gonzalez, Troy Tulowitzki and Helton, plus pinch hitter Jason Giambi) wasn't able to come through with the clutch hit this time, CarGo, Tulo and Giambi all went down by strikeout. 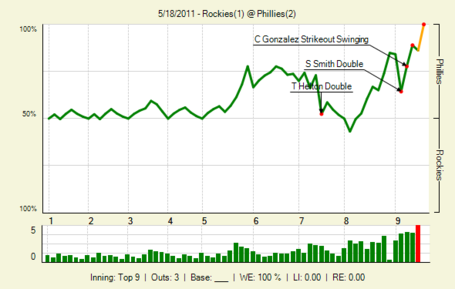