Jason Giambi responded to last night's furious criticism with his first career three home run night, in the midst of an unusual game that saw a scratched starting pitcher, three rainy innings, two banged up outfielders and a partridge in a pear tree.

The game began in a period of cloudy but docile weather, but the radar foreshadowed a downpour about 30 minutes into the game. Joe Blanton was the Phillies probable starter for the game, but was pulled at the last minute with recurring elbow problems, in favor of Kyle Kendrick, who has been pitching largely out of a relief role this year.

The Rockies got started in the first inning with singles from Dexter Fowler and Troy Tulowitzki. Giambi's first home run of the evening brought them home. The rain began to fall heavily in the third inning, but knowing that the weather would calm down in the near future, the game continued. The rain didn't stop Giambi, who knocked his second home run of the game, bring home Carlos Gonzalez who had doubled earlier in the inning. Unfortunately, the rain would do some negative damage when Gonzalez injured his groin while chasing a fly ball in the bottom of the inning. Ryan Spilborghs replaced him in the game, and he himself would later sustain an injury when a pitch from reliever Scott Mathieson would connect with his inner elbow, though Spilborghs was able to recover quickly and stay in the game .

The rain died down but the Giambi train kept rolling in the fifth, when the first baseman hit yet another home run, this time off of reliever Danys Baez, bringing around Tulowitzki who had reached on an error. Giambi became one of the oldest players in MLB history to hit three home runs in a game. He would strike out in his final two at bats of the game.

Other offense notes: Jose Lopez had a four hit game tonight, Seth Smith had a three hit game along with Giambi, while Jonathan Herrera had two hits. Chris Iannetta struck out in four of his five at bats during the game.

Jhoulys Chacin pitched effectively for most of the game, with the only major hiccup coming in the fourth inning. Chacin got what should have been the final out of the inning by striking out Ross Gload, but Gload was able to reach first base as the wild pitch got by Iannetta behind the plate. Raul Ibanez, the only opposing player to get multiple hits off of Chacin, knocked a ground rule double that brought around Placido Polanco, who had reached on a single. Chacin left the game after the seventh inning with 113 pitches thrown and nine strikeouts to four hits and one walk, with just the one run allowed.

Matt Lindstrom and Felipe Paulino pitched a clean eighth and ninth in relief to wrap up the game in the win column. The Rockies are currently tied for first place in the division. The Giants still have a game to play tonight.

Linens and things after the jump. 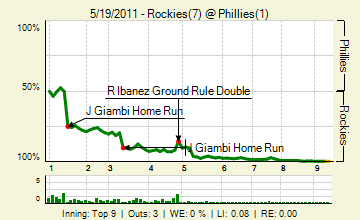