Jasons and Matts Perform, Other Pitchers Do Not

Share All sharing options for: Jasons and Matts Perform, Other Pitchers Do Not

All 4 Matts appeared out of the bullpen tonight.

Matt the First was Reynolds, brought into the game in the 7th to get Prince Fielder to strike out on 3 pitches.

Rafael Betancourt gave up the 4-3 lead in the 8th, however, with a Casey McGehee homer, to bring the game even at 4.

Matt the Second was Lindstrom. Lindstrom pitched a perfect frame with a punchout.

Matt the Third was Belisle. Belisle allowed a hit and a walk.

Matt the Fourth was Daley, who pitched a perfect inning.

It was around this point that the Rockies took the lead back, and Huston Street gave the game right back up by allowing a leadoff homer to Yuniesky Betancourt, who was 3-for-6 on the night. Street finished the rest of the inning without allowing another run. Tied at 5.

Next half, Yuniesky Betancourt booted a DP ball leaving runners at 1st and 2nd with 1 out. Dexter Fowler blooped a single down the LF line to drive Chris Iannetta in. Rockies up 6-5.

Last pitcher available in the bullpen was Felipe Paulino. Felipe Paulino walked Ryan Braun and then Prince Fielder destroyed a baseball into the RF stands. As it has been written.

So the Matts pitched scoreless innings and the Jasons hit home runs. What a freaking game.

Graph and call after the jump. 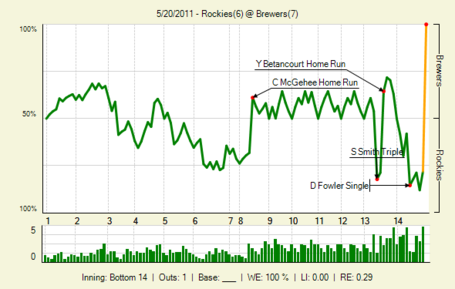