The Milwaukee Brewers rode the strong pitching of Shaun Marcum and a two run first inning to hang on to beat the Rockies three to two on Saturday.

The Rockies scored first thanks to a solo home run by Carlos Gonzalez in the first inning, but that was the only damage Colorado would inflict until a last gasp run in the ninth. The Brewers answered in the bottom of the first off of Rockies starter Clayton Mortensen with a Prince Fielder double that scored Rickie Weeks, and then later in the inning, a Jose Lopez error compounded the situation and allowed Fielder to score as well. Jonathan Lucroy added an insurance home run off Mortensen in the fifth, a run that proved necessary late when Seth Smith grounded home Troy Tulowitzki in the ninth.

The recipe for this loss was a solid pitching effort by the opponent, and a brutal one for seventeen hitting line from the Rockies fourth through ninth hitters. That one hit was a single by pinch hitter Jason Giambi in the ninth inning.  Add in errors by Lopez and Jonathan Herrera, and you wind up with a bitter, bitter brew to swallow.

The good to take from the game was mostly confined to some decent, efficient pitching by Mortensen and then two Matts from the Rockies bullpen (Daley and Reynolds,) the Cargo home run, and Tulo's two for three performance, including the last inning triple and a walk. Solid efforts from the aforementioned, but this particular sandwich wasn't enough to overcome Marcum and the Brewers, as there are a lot of goose-eggs between the two pieces of flatbread in the line score:

The Rockies try to avoid the sweep tomorrow. 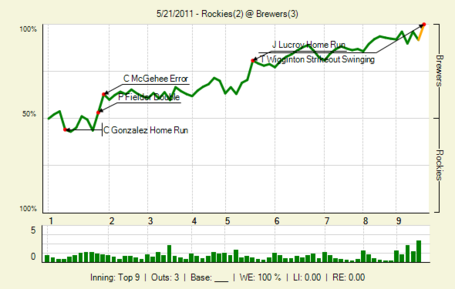