Before the game, I thought this game reminded me of the game against Charlie Morton and the Pirates on May 1st. After the game, I find that this game reminded me of this game against the Marlins. I mean, in both games Ubaldo Jimenez was pitching pretty well (though somewhat wildly) and in both cases Jimenez (0-4) allowed only one hit (until an 8th inning Mark Kotsay double today), and both times the hit scored three men.

This time the big blow was a two out 3rd inning Ryan Braun triple that turned into a Little League HR when Dexter Fowler first misplayed what was probably a double into a triple and then missed the cutoff man to turn a triple into a HR. I can't be all mad at Dex, though, since his 3rd inning triple (and a Carlos Gonzalez seeing eye RBI single) gave the Rockies a short-lived one run lead. Unfortunately, the Rockies' offense seemed to be cursed today. Numerous line drives fell into the gloves of Milwaukee defenders, while Jimenez grounded into a double play with the bases loaded. In all, Colorado mustered only 4 hits on the day off of Randy Wolf (4-4) and company.

As for Jimenez's pitching, he looked pretty darn good, all things considered. Yes, he walked five and gave up the aforementioned triple, but the fact is that he gave up only two hits, went all 8 innings (the farthest he's gone this year), and struck out four. Jimenez has probably pitched well enough to win three or four games this year, but the chips just haven't fallen his way yet. His velocity looks like it's coming back and when he harnesses his control, I have a feeling that we're going to see some brilliant pitching from number 38 soon.

The loss brought the Rockies within one game of .500 (23-22). Hopefully a seven game homestand against the Diamondbacks and the Cardinals will shake some life into the team, because this is getting a little ridiculous. 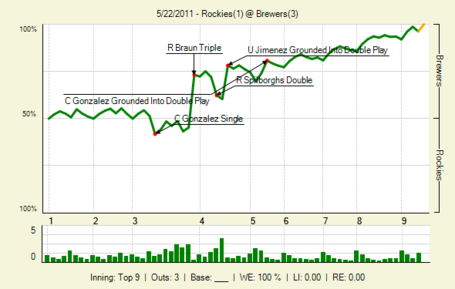 We Salute: Ubaldo -- should have been win #1

We Are Disappointed In: Everyone else. That includes you, Jose Morales. I don't care that you didn't play. I'm very disappointed in you.