Food and Sports seem to go together so hand-in-hand that having selection at the ballpark is almost a must at most major sporting events anymore. While most football, basketball, and hockey arenas feature the standard issue nachos, pretzels, cheap burgers and fries, maybe a chicken finger basket. Occasionally they'll have some special stuff if you're sitting in the primo seats, such as the Victory Knot at the Pepsi Center. But nothing - Nothing - compares to the nearly absurd selection of food at Coors Field.

Coors Field features the typical ballpark fare of peanuts, popcorn, hotdogs, and nachos. It's the specialty foods that really make Coors stick out. Several concession stands have multiple types of hot dogs - and not just "1/8 pound or footlong?" kind of selection, but stands that give you the option between bratwursts, Chicago style, New York style, Rockie Dogs, and even more on top of that. Nacho alternatives that make Chipotle jealous. Pizza. Cheesteaks. Garlic Fries. Even Rocky Mountain Oysters.

But we can't forget one of the relatively recent additions to the Coors fare, and that is the Helton Burger.

Housed in its own stand on the LF concourse, the Number 17 Burger Shack and custom logo are very hard to miss in your quest for delicious concessions. Ballpark food is a bit expensive in general, but offering a $14 combo for a burger, side, and drink is a pretty decent deal, as far as standard ballpark pricing goes.

So I go and get in line for my Helton burger. My first stop is to get a beverage. I'm offered a beer, soft drink, or milkshake. Considering how typical beer and soft drinks are at baseball games, I opt to get the chocolate shake. Next stop: fries or rings? Now, the funny story for me is which side I choose. Eating onions typically makes me retch, but something about onion rings makes them passable. Maybe it's the fact that their fried. Frying foods makes them infinitely acceptable, as I'm sure most ballpark diners would agree with.

So I gut it and ask for onion rings, but ask for my burger without onions. It's a pretty decent sized burger as well, and the onion rings are HUGE. I had roughly 6, maybe 7 rings, and they took up all the available space in the little cardboard boat. The burger itself is decent sized, and comes with special sauce and pickles, along with the 86'd diced onions. The Aramark employee assembling the meals was happy to oblige my request for an onion-free burger.

The shake, rings, and burger ran $14, as mentioned above, and for something different, this wasn't all that bad. 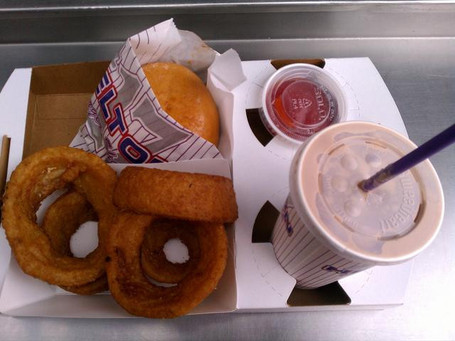 I chatted with the cashier for a couple of minutes after getting my meal (which ultimately leads to my downfall, which I'll explain in a second), and when I told him I was taking a picture of my meal for the site, he asked to be in it too. I was happy to make this guy's dream of being on Purple Row come true (because really, everyone dreams of being on Purple Row....right?) 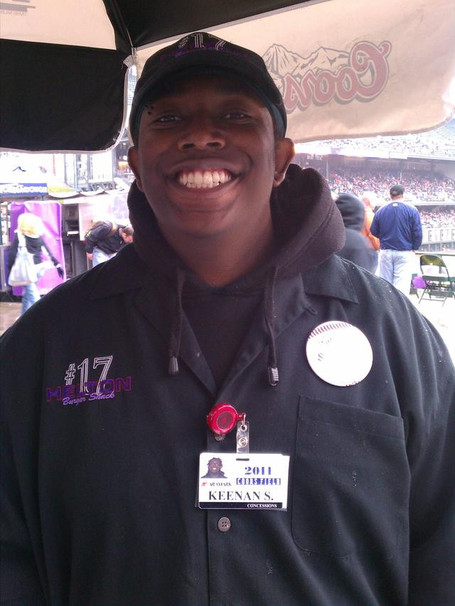 Nice guy, that Keenan S. I'll say that for a lot of Coors concession employees, they're typically very friendly, and will chat for a minute or two with you if there isn't a big line.

So on to the food.

I mentioned a downfall earlier, and that downfall was 90% weather based. I went during the Padres series to try the Helton Burger on a Saturday, and that was the day with the light cold rain everywhere. Standing and chatting with Keenan and taking pictures gave it time to cool down. Factor in the fact that I was sitting on the opposite side of the stadium, and the walk back added to the cooling of the food.

I got back to my seat and had already finished like 1/2 of my shake. I took a big bite of the burger, and it was pretty darn tasty - I can only imagine that it would've been far more satisfying had I eaten it right after getting it, but what are you gonna do? The sauce and pickles clashed a bit, but if the goal was to make a unique and generally good burger, the Helton Shack succeeded. The breading on the onion rings was better than the standard fast food style of onion rings as well, and it made up for the fact that everything got cold fast.

One thing that I haven't mentioned is the fact that this pile of food is downright filling. I couldn't finish my meal. Part of that was due to the fact that I had a whole onion ring left at the end of the meal that had been sitting for awhile, so it was downright cold, but the burger and what rings I did eat left me full until much later that night.

Final review is that the Helton Burger may not be the best value in the park, but it's certainly a good burger, and the kind of a ballpark meal that will set itself apart from standard variations on ballpark food. I've heard a few horror stories about gimmicky burgers such as the Krispy Kreme burger sold at one point by the Gateway Grizzlies, but the Helton Burger certainly doesn't fall into that category. For $14, the meal of shake, rings, and burger was worth the expenditure, and I highly recommend you try it yourself.

Just be sure it doesn't get cold.