Carlos Gonzalez homered twice and drove in four runs, and was one of five Rockies players with two hits as the Colorado's bats finally came alive en route to a 12-4 victory over the Diamondbacks in Game One of today's doubleheader.

Things weren't all rosy for the Rockies, as Jorge De La Rosa left the game with one out in the third inning after apparently suffering an elbow injury. However, Greg Reynolds relieved him and after allowing two inherited runners and one additional run to score in that inning, he settled down and didn't allow a run for the rest of his time on the mound, which was 3.2 innings in all. He allowed just the one earned run on three hits and a walk while striking out two, and he picked up his second win of the season. Great job by Greg, who was already slated to start on Saturday against the Cardinals. We'll have to keep an eye on some possible rotation shuffling.

In addition to Gonzalez, Seth Smith hit his fifth homerun of the season and also smacked a run-scoring double, as he raised his season line to .304/.364/.543. Dexter Fowler, Jose Lopez, and Chris Iannetta each had two hits as well. One of Fowler's was a triple to deep centerfield which plated a couple of runs and put the Rockies up 10-3 at the time. All in all, it was a great effort by the offense - and much needed, as they had to dig out of a 3-0 hole.

There aren't any updates yet on DLR's elbow. We're obviously hoping for the best.

Graph, Rowcall, and more after the jump... 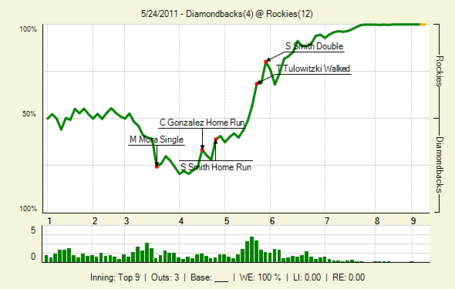