Joe Saunders came in with a pitching resume in 2011 begging for a DFA.  In his only prior career start at Coors Field, he was chased in the third inning and tagged with seven runs.  Yet tonight, he might as well have been Cliff Lee on the mound.

It didn't help that Seth Smith, Todd Helton, Chris Iannetta and Jonathan Herrera all found themselves on the bench for the nightcap of the double header.  Jason Giambi and Ty Wigginton hit solo home runs to account for Colorado's offense, but they didn't otherwise threaten much.

Jhoulys Chacin was uneven, particularly in the sixth inning.  After walking Ryan Roberts to lead off the inning, Chacin gave up three doubles to the left handed hitting Kelly Johnson, Stephen Drew and Miguel Montero, all of which were well struck.  He gritted through seven otherwise decent innings, but it would not prove to be enough.

At the end of the day, the Rockies split the double header with Arizona and might actually make up a half game on San Francisco if their current 4-0 deficit to the Marlins holds.  But it was a tough tough day for Rockies fans.  Not only did they feebly fade into the night offensively, but (if you've missed it), Jorge de la Rosa is out for the season and will likely need Tommy John surgery.  The luster of that series opening trouncing was gone before the nightcap even began.

Ian Kennedy and Jason Hammel are on the bump tomorrow night.

"Feels like the Rockies lost two today. Wait, no it doesn't. Feels way worse than that." 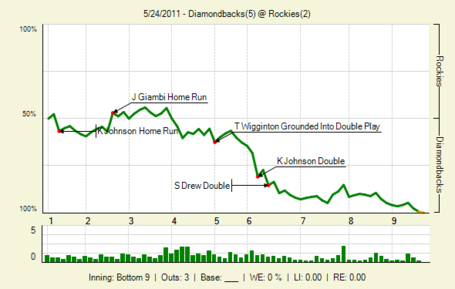