Hammel sharp, but Rockies offense dull in 2-1 loss to Diamondbacks

Share All sharing options for: Hammel sharp, but Rockies offense dull in 2-1 loss to Diamondbacks

On a night where three runs would have earned a W, thanks to another well pitched gem by Jason Hammel, the Rockies offense managed to score just once on the Diamondbacks. Seth Smith led off the fourth inning with a double and would score on a Todd Helton sacrifice fly, but that was it. Ty Wigginton doubled and had a near home run taken from him by Chris Young. Jonathan Herrera also doubled, and for the most part, the Rockies were able to make better contact off of D-backs starter Ian Kennedy than Arizona was off of Jason Hammel, but be it by misfortune or their own negligence (Smith overran second base in the first inning, killing the Rockies first scoring chance,) Colorado failed to put together a significant rally.

Conversely, in a typical scene for this first third of the Rockies season, the Diamondbacks scored their two runs when a Rockies mental lapse compounded into a multi-run inning, this time when a throwing error by shortstop Alfredo Amezaga led off the sixth to allow Ryan Roberts aboard, and the next batter, Kelly Johnson, doubled for the D-backs only extra base hit off of Hammel. Both Roberts and Johnson would score before the bleeding stopped.

The bleeding in the standings is another matter, as it's an ongoing wound. With the loss, the Rockies fell behind Arizona into third place in the NL West. Right now we're seeing a Rockies team that's failing to capitalize on other teams' mistakes and allowing opponents to run roughshod on their own errors. It's not a good formula for team success, no matter how much talent you have. 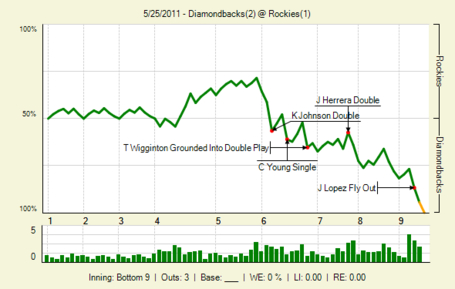