Diamondbacks 6, Rockies 3: Rockies Can't Even Lose By One Run Correctly

Share All sharing options for: Diamondbacks 6, Rockies 3: Rockies Can't Even Lose By One Run Correctly

A typical May 2011 Rockies baseball game in just about every way.

Hoping to spark the offense, Jim Tracy tried out a new lineup in the game, putting Seth Smith in leadoff and bumping Dexter Fowler into the eight hole. The move didn't work out well for either player, as Fowler went 0-3 with a walk and a K, while Smith went 0-3 with a K before being removed from the game with a muscle cramp.

Starting pitcher Clay Mortensen escaped from trouble in the second inning, but was unable to retain his control in the fourth. After walking Stephen Drew and Chris Young to lead off the inning, Arizona catcher Miguel Montero hit his fifth home run of the season to give Arizona the lead. The Rockies would attempt to retaliate against Arizona starter Micah Owings in the bottom of the inning with three straight singles from Carlos Gonzalez, Troy Tulowitzki and Todd Helton (who batted in Gonzalez with his hit), but Ty Wigginton would follow by grounding into a double play, killing the momentum.

In the sixth, a Chris Iannetta throwing error (that Tulowitzki probably still should have caught) would allow a base-stealing Chris Young to advance to third base. Former Rockie Melvin Mora would bring him home on a single, though Mora himself would be thrown out at second base on the play.

Feeling obligated to lose by one run, pinch hitter Jason Giambi and Ryan Spilborghs (who had come in for Smith) brought around Helton and Wigginton in the seventh off of Esmerling Vasquez, but Arizona would spoil the Rockies losing by one run as Kelly Johnson took Huston Street deep for his seventh home run of the year in the top of the ninth. Xavier Nady had singled earlier in the inning and was brought around on the HR giving Arizona a three run lead.

Mortensen gets his second loss of the season, and the Rockies dip to under .500 on the season and at home. Yuck.

In other news, Felipe Paulino was traded to Kansas City during the game.

Things after the jump. 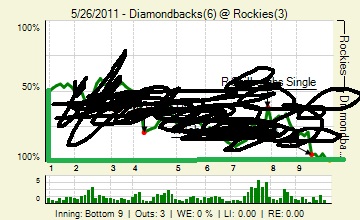