Bruce Billings Not Awful In MLB Debut; Everyone Else Was

Share All sharing options for: Bruce Billings Not Awful In MLB Debut; Everyone Else Was

The sheer number of baseball games I've watched where something absurd happens had me coming into this game with high hopes for Ubaldo Jimenez. "Go Figure, the struggling Ace suddenly gets his season on track against the best hitting team in the NL".

I blame my gut, honestly. I blame my weird gut feelings that never - EVER - come true. The one where I see the batter at the plate and I'm thinking "I can see that ball lacing the gap" - as if I have some sort of premonition of what's to happen in the plate appearance. I got that gut feeling that Ubaldo was going to show the form he had his last start and the results of his start against the Giants during the weeks of walkoffs. That he was gonna go like 8 innings, 1 ER, 7K, 3BB, 6H and Huston Street was gonna get the 3-run save.

Ubaldo went 6 innings, gave up 6 runs, struck out 4 and walked 2 (which was maybe the only highlight of his outing). None of the pitching was very good. Matt Daley allowed 3 runs in his inning of work, and Bruce Billings went 2 innings, allowing only 1 run. 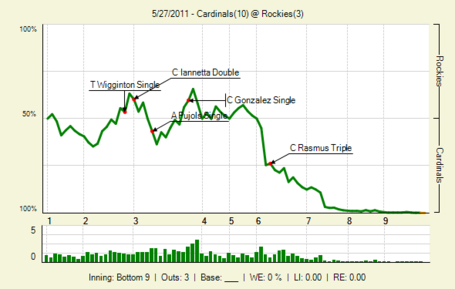