The Great Nicasio says "Your troubles are only illusions in your mind, the Rockies are fine"

Share All sharing options for: The Great Nicasio says "Your troubles are only illusions in your mind, the Rockies are fine"

After everybody gets off the bandwagon, everybody can get back on the bandwagon. A night after failing to produce even a glimmer of hope that their season could turn around with their ace on the mound, the Rockies provided just that spark and more on Saturday night with a pitcher just up from AA, their ninth starting pitcher of the 2011 season. While not completely dominant, Juan Nicasio pitched effectively and looked the part of a major leaguer for seven innings against the Cardinals. The revamped offense looked sharper still, breaking out for fifteen runs on 18 hits in a 15-4 win over St. Louis.

Maintaining his sinking mid-90's fastball into the seventh inning of his major league debut, Nicasio took command of the contest by the quality of that pitch, something Rockies fans can probably contrast to recently departed Felipe Paulino's speedy but flat and elevated fastball. Both have the plus attribute of velocity, but the added deception and movement with Nicasio's should allow him to find greater MLB success with it, despite the current lack of an out pitch among his secondary offerings. As is probably going to be closer to his MLB style until or unless his off-speed pitches advance, Nicasio only struck out two, but only walked two and kept the contact against him relatively weak.

Catcher Chris Iannetta led the offensive charge, with four hits, including two home runs and six RBI. Recently recalled from AAA second baseman Eric Young Jr. added three hits batting lead-off, and Ryan Spilborghs chipped in three hits and four RBI as well. Young also added a stolen base and may have taken some spark-plug pressure off of Dexter Fowler, who had been struggling batting first for the past few weeks. Fowler for his part had a pair of hits, a double and triple, albeit he also added two more strikeouts to his mounting season tally.

By rebounding from last night's blowout by the Cardinals with one of their own, the Rockies once again have a fairly significant disparity between their run differential for the month and their record, indicating that they're probably not as bad as you might be thinking. The question of course remains how the Rockies can channel the team that came out tonight more frequently, and avoid the one that came out last night.

At any rate, the record:

The graph and roll call: 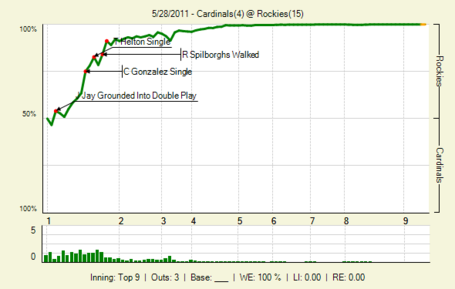