Share All sharing options for: Rockies Fall to 6-12 in One-Run Games, Lose 4-3 to Cardinals

So...it was a microcosm of the Rockies' season in the bottom of the seventh. Bases loaded, nobody out, down 4-2. Big bad Jason Giambi at the plate. Air pregnant with the possibility of a Rockies rally. Then a strikeout and a double play. Okay, so it's not exactly a microcosm, as the Rockies usually don't get anybody on in the late innings. But it was still frustrating, as the Rockies, owners of 15 come from behind wins this year, still don't have one from the 9th inning on. They tried mightily today, as Eric Young Jr. and Dexter Fowler provided two-out singles to cut the lead to one, but Carlos Gonzalez couldn't come through with runners on the corners.

The Cardinals got 3 of their 4 runs in the game on homers off of Jhoulys Chacin (5-4), but only mustered six hits on the day. Outside of the 3 run first for St. Louis, Chacin pitched quite well, striking out seven men and walking two. Unfortunately, the magic four run boundary that I keep talking about failed to materialize again for the Rockies and St. Louis' 4 would be enough. Colorado got 9 hits on the day, including 3 from Ty Wigginton, but in high leverage situations Colorado bats wilted in the heat.

Three game series remain bad news for the Rockies, as they've only won two of them this season. Win the loss, they finish the seven game homestand 2-5. Now they head to LA to play the Dodgers. 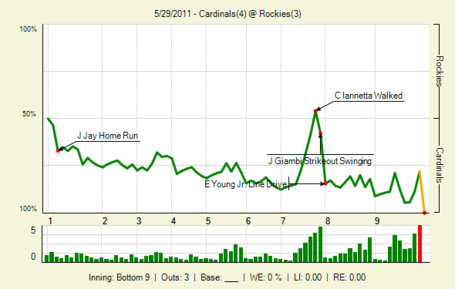