The Rockies lost by one run tonight in a nine-inning baseball game.  That might not seem noteworthy, but here on May 3, it is the first such loss for Colorado in the 2011 season.

Jorge de la Rosa was off his game, but he still ground through to a quality start, permitting three runs on seven hits in six innings.  Of his six strikeouts, four came as the third out of an inning, helping to strand runners.

The offense showed some life, as the bats produced at least one hit in all nine innings.  Unfortunately, they were 0-for-6 with runners in scoring position and stranded nine men.  Carlos Gonzalez continued his resurgence with a two walks, a bunt single and a 453-foot solo home run.  A Ryan Spillborghs sac fly and Jonathan Herrera triple accounted for the other two runs.

I am not one to be critical of managers as it is way overdone, but I am not sure Jim Tracy can be proud of this one.  Chief among his errors was his bullpen choice in the eighth inning of a tie game with the middle of the Diamondbacks' order coming up.  He didn't choose the dominant Matt Reynolds, the bullpen horse Matt Belisle, or the 8th inning man Rafael Betancourt.  They were all rested.  Instead, he chose the erratic Felipe Paulino.  He missed with three sliders before Justin Upton punished a home run to right field on a 3-0 pitch for the winning margin.  To Paulino's credit, he deconstructed the next three batters in impressive order.

Todd Helton had himself a solid game, with a single in the first inning and CarGo trademark laser to right field in the eighth, a foot shy of leaving the park. Troy Tulowitzki hit two flyballs to the warning track, and Seth Smith just missed an opposite field home run in a pinch-hit appearance. 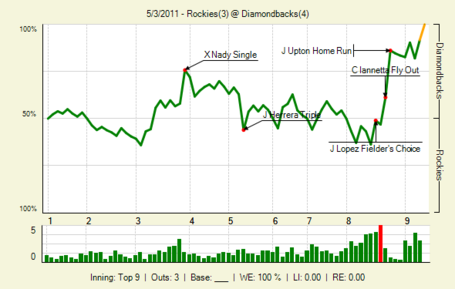