Share All sharing options for: Rockies 14, Dodgers 11: If Only Games Were Won in the "H" Column...

Check out these offensive lines for the Rockies in tonight's ballgame:

Add that up, and you'll get 14 hits. Factor in the walks listed above, as well as one drawn by Chris Iannetta, and that's 17 baserunners. Sounds terrific, until you see that the Rockies only put up a "1" in the runs column, while their opponent notched a "7."

Colorado was 1-for-12 with runners in scoring position, "led" by their star shortstop who was 1-for-4 with a GIDP. And the one hit came in the first inning, and ended with Gonzalez getting thrown out at home plate by Matt Kemp, in a sure sign of things to come. The Dodgers, meanwhile, were a highly-efficient 4-for-4 in those same situations.

Hammel went just 4.2 innings and allowed seven runs on ten hits while striking out two and walking one. Opposite him, Chad Billingsley "scattered" 11 hits in seven innings while punching out eight hitters.

The Rockies seemed to have already forgotten the strategy that made them successful against one of the league's best pitchers just two short days ago - take what the pitcher gives you, concentrate on making contact if nothing else, and don't try to hit the ball out of the ballpark every time a runner is on base. What a joke.

The club has certainly endured a lot of bad luck throughout a brutal May in which they are now 8-20. In fact, I'm not sure I've ever seen such an unlucky stretch in all my years of closely following baseball. However, there are also many wounds that are self-inflicted, and if the Rockies don't start fixing them on this road trip, their season will already be in serious jeopardy.

Meaningless crap after the jump... 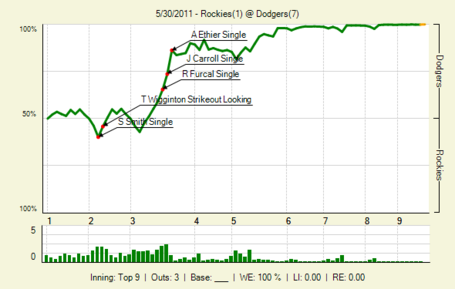 The Rockies will no doubt go for more record-breaking performances tomorrow night at 8:10 PM MT, as Clayton Mortensen takes the mound opposite Ted Lilly.