Share All sharing options for: Dodgers 8, Rockies 2: Macabre May Ends With Characteristic Thud

The month of June commences in an hour in the Mountain Time Zone, and it couldn't come a second early.  With tonight's loss, Colorado finished the month of May 8-21, their third worst month in franchise history.  For a team that has finished above 4th place in just 9 of 19 seasons, that's quite the accomplishment.

Fan favorite overachievers Clayton Mortensen and Matt Daley turned into pumpkins at Dodger Stadium.  Mortensen walked four, struck out nobody and got just five groundouts.  Sinkerballers can survive and even thrive with very good control, but when the control wanders, he can become very hittable.  For the game, the right-hander allowed four runs on five hits in four innings before being replaced by Matt Belisle.

Daley came into the game in the seventh with the Rockies down three and allowed two fly outs, two singles, and a 3-run home run that killed the Rockies' chances at a rally.  The replacement for Felipe Paulino on the roster now has a 10.50 ERA (7 ER, 6 IP).

The offense was stagnant again.  Chris Nelson started at third base, doubled, stole third and scored on a sac fly to second base.  Ty Wigginton hit a solo home run. Ted Lilly struck out eight Rockies - five looking - and Don Mattingly dumped a pound of salt in the wounds of Rockies fans by sending out a fellow named de la Rosa to shut the Rockies down over the final two innings.

As noted by Eric Stephen, the Dodgers just won three consecutive games with 7+ runs for the first time since May 25-27, 2009.  The final game of that stretch was Clint Hurdle's last as Rockies' manager.

As for silver linings, both the Giants and Diamondbacks lost tonight, so Colorado holds steady at 4.5 games behind in the NL West.

Lindsey Vonn should be an expert on the Rockies

She knows all about going downhill fast. 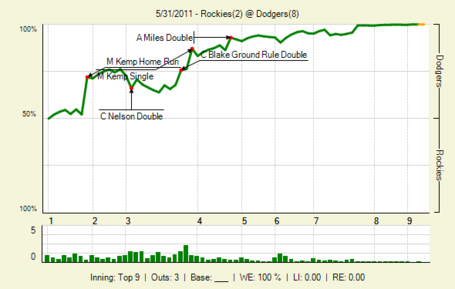