Jhoulys Chacin pitched another gem as he continues to emerge as a reliable starter, and the Rockies offense burst through for crooked numbers in consecutive innings giving the team a 6-4 victory over the Diamondbacks on Wednesday night. Chacin gave up an early home run to his pitching opponent, Barry Enright, but settled down for seven innings, allowing two runs (both on HR's) on three hits and four walks, and struck out six.

After a couple of early misfires with runners in scoring position, Ian Stewart started the scoring for the Rockies off in the fourth with a double, perhaps generously scored -but well hit nonetheless- on a misplay by Justin Upton, scoring Todd Helton. A couple of batters later, Chris Iannetta belted a two run home-run, his fourth of the season, to give the Rockies a 3-1 lead. An inning later they would expand on that, thanks to a two run Helton double (#534 for his career, tying him with Lou Gehrig for 31st all time). Seth Smith would then drive Helton home with a single to complete the Rockies scoring for the night.

Matt Belisle, Matt Reynolds, and Huston Street closed the game out for Colorado. Reynolds gave up a ninth inning home run to Juan Miranda, and there was a bit of a fire to put out before Street got the final K of Kelly Johnson to seal the victory. Johnson had homered already once in the game off of Chacin and came up with two runners on and the potential to walk-off with another one before Street closed the victory out for his 11th save of the season.

Does it always seem that Iannetta homers with the game still on the line? Perhaps that's because 8 of his 13 HR's over the past two seasons have come with the Rockies tied or trailing by one. Carlos Gonzalez added two more hits, while Troy Tulowitzki suffered through another ofer night in five AB's. The two superstars continue to see their batting averages converge, with Cargo's up to .257 and Tulo's down to .271. Iannetta caught Miranda attempting to steal and has now thrown 7 of 21 attempting base thieves. 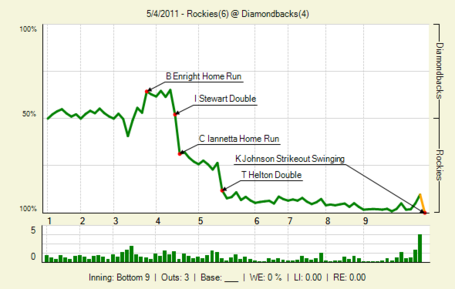