It's great to have a #2, #3 and #4 consistently coming out and picking up the slack for a struggling #1, isn't it? What's not so great is failing to score in the multitude of situations we had early in the game. Or late in the game. Or at all.

The early theme of the game for both teams was failure to capitalize on opportunities. The first two batters of the ball game, Dexter Fowler and Jonathan Herrera, reached base against Arizona starter Ian Kennedy, but were unable to score. The Diamondbacks followed suit with a similar instance with multiple baserunners and less than two outs that Jason Hammel would eventually squirm out of. In the second, the Rockies would scratch out a run when Seth Smith scored on a Jose Morales sac fly with no outs, but a foolish baserunning choice by Ian Stewart as he tried to move up on the same play resulted in another out, followed by a strikeout of Hammel.

Fowler would lead off the third inning with a triple, but even with Kennedy struggling to throw strikes consistently, he struck out the next two batters in Herrera and Carlos Gonzalez and Troy Tulowitzki would pop out,l once again stranding a runner in scoring position. The fourth would see Todd Helton hit his eighth double of the season and 535th of his career, securing him 31st place all time. The team's first hit with a runner in scoring position, a single up the middle scoring Helton from second, came once again from Morales, his second RBI and the Rockies second run. Once again, only the one run would score.

The pace of the game changed dramatically as Hammel and Kennedy both regained form and pitched well during the middle innings. Melvin Mora and Juan Miranda brought Hammel's smooth streak to an end in the sixth with back to back singles with two outs, but Gerardo Parra struck out allowing the Rockies to escape the inning. Hammel's final line included no runs and 4 Ks on 4 hits and 3 walks over 7 innings.

Rafael Betancourt came into the game to pitch the eighth. Betancourt routinely made motions to his mouth while on the mound, causing the home plate umpire to call three automatic balls on Betancourt in the inning. Aside from that anomaly and one walk, Betancourt was effective if a tad inefficient, and got his third out after an epic ten pitch battle with Melvin Mora.

Huston Street came in to throw the ninth, allowing a home run to Gerardo Parra, the second batter of the inning. Following a second strikeout, Chris Young also took Street deep, tying up the game at 2 runs apiece. This is Street's first blown save of the year. Jim Tracy chose to bring in Matt Reynolds to attempt to retire Kelly Johnson, who would single up the middle, bringing Justin Upton to the plate and Matt Lindstrom to the mound. Upton would strike out, sending us to extra innings.

Arizona closer JJ Putz would take down the Rockies in the top of the 10th inning in order. Franklin Morales would counter for the bottom of the inning. Morales led off with a walk to Stephen Drew. After advancing to third on a sacrifice bunt and a flyout with an intentional walk to Melvin Mora in between, Morales would get Gerardo Parra to ground out to move on to the 11th, where the RISP fail would continue for the Rockies. Carlos Gonzalez and roy Tulowitzki would reach base against Arizona reliever David Hernandez, followed by three more ugly outs. After getting the first out, Morales was be relieved by Matt Belisle. A Chris Young double followed by an awkward Justin Upton popup into shallow right field would finish the game, stamping Belisle with his second loss on the season.

That 2 runs was all the offense the Rockies could muster tonight, going 1 for 12 with runners in scoring position (Arizona went 1-10 with RISP, the 1 obviously being the game ending single). A frustrating loss to be sure.

Usual mumbo-jumbo after the jump. Get to San Francisco and rebound. 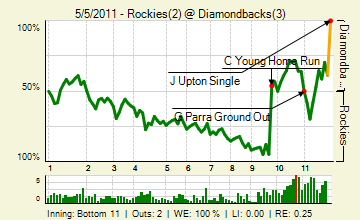