NL West Report: The Return of the NL Worst

Share All sharing options for: NL West Report: The Return of the NL Worst

On the morning of April 18, the Rockies were 12-3 and outpacing all 29 teams in the W column. Since then, they have lost 4 of 5 series and gone just 6-8. So how much did the NL West field shave off of Colorado's division lead in that poor stretch? That's right - zero games. Zilch. The Rockies led the division by 4.0 games after winning 12 of 15 games, and they still lead by four after winning 6 of the next 14.

Thankfully up to this point, the rest of the NL West has struggled mightily. As frustrated as Rockies fans are right now, at most one other team (Arizona) is happier with their start to 2011. Only one team in the division is over .500, and only one has a positive run differential, both the fewest of any division. 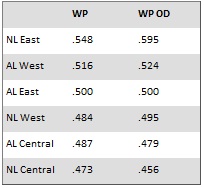 Over the past two years, I have used this space to attempt to dispel the irritating "NL Worst" stigma the division seemed to carry since the 2005 season.  The division was MLB's 2nd best in 2009, then fell to 3rd best in 2010.

This season, the division has fallen further, with MLB's 4th best cumulative win percentage and win percentage against teams outside the division. So NL Worst? No, the NL Central will forever hold that title, even if a convenient title can't be manipulated out of the name.

Here's a quick overview of what is holding back each team in the division:

Take the jump for news on all the teams.

You Should Know:  Barry Enright was optioned and reliever Aaron Heilman replaced him on the roster, leaving Enright's rotation spot in question. Josh Collmenter is a likely candidate.

Divisional Change: Gained one game on first place Colorado and moved into a tie for third place.

News: MLB.com's Tom Singer wrote a feature on Stephen Drew, relaying that the younger Drew looks to have a better career than old brother J.D.

I spoke to John Hester's agent in Scottsdale this March, and he told me he was attempting to get Hester traded to a team that might play him in the majors after a .370/.440/.667 2010 season in AAA. This past week, Kevin Towers agreed to send Hester as the PTBNL later in the Mark Reynolds trade.

The Diamondbacks have the 3rd and 7th picks in the June amateur draft. Up to this point, most of the buzz has indicated they would take Danny Hultzen with the third pick and a safe signable pick in the seven slot. Should Gerrit Cole fall to them at three, Nick Piecoro indicates they would strongly consider drafting the UCLA starter. Piecoro also tweeted that he believes Bubba Starling is in the mix. Starling is quite possibly the most talented high school hitter in the draft since Justin Upton.

Injuries:  Activated RHP Aaron Heilman from the 15-day DL. Willie Bloomquist is nearing a return. Stephen Drew is day-to-day with a groin injury and the flu, but he did play last night. Zach Duke threw a 40-pitch bullpen session Wednesday.

You Should Know:  Matt Kemp is off to a ridiculously hot start, but does that mean he's turned the corner. As TrueBlueLA's Phil Gurnee points out, Kemp has a habit of getting off to fast starts.

Divisional Change: Fell into a tie for third place, no change in divisional deficit.

News:   Jonathan Broxton lost his closer role and then proved to be injured. He won't need surgery, as his elbow injury turned out to be a bone spur and bruise, but they placed him on the disabled list today. No matter what happens, Huston Street will never have the problem Jonathan Broxton did. It's well worth the click.

Predictably, there was a lot of news about the Dodgers' dramatic ownership situation.

Frank McCourt gave an interview with LA Times' Bill Shaikin and said "I have just begun to fight." Yahoo's Tim Brown opined about the state of the Dodgers. And of course, the big story - the Dodgers can't make May payroll.

McCourt [may be forced] to find outside financing to meet the second May payroll, surrender the team or file suit against MLB. It is "very unlikely" that Fox would extend another loan to McCourt, a person familiar with the matter said.

It should be noted that even though Dodgers' players could technically become free agents if the Dodgers don't make payroll, such a circus scenario would never happen. That is, after all, why MLB took control of the situation. MLB will ensure payroll is met, lest a wildly embarrassing scenario make a mockery of the season.

Nothing is safe with the Dodgers drama anymore. Even the Osama bin Laden assassination stimulated more problems.

Rafael Furcal would have had his $12mil option for next season vest with 600 PA today. As Mike Axisa pointed out, that's unlikely to happen now. That is one expensive head first slide.

Transactions: Optioned RHP Kenley Jansen to the AA Chattanooga Lookouts, then called him back up today. Recalled UT Russ Mitchell from AAA Albuquerque.

Injuries:  Placed Jonathan Broxton on the 15-day DL today. Casey Blake underwent surgery on an infected bursa sac in his elbow on April 29. Activated LHP Hong Chih Kuo and LF Jay Gibbons from the 15-day DL. LF Marcus Thames was placed on the 15-day DL May 3 with a quad strain. Juan Uribe is day-yo-day with a hand contusion. Andre Ethier is day-to-day with a sore elbow.

You Should Know:  Behind an MLB career high BB rate and career low K rate, Cameron Maybin has a team-leading wRC+ of 117. On the other hand, he has a miniscule 12.7% line drive rate, so without a shift in batted balls, his othwerwise legitimate looking .308 BABIP will plummet.

News: Heath Bell is used to being in trade rumors. So what is his secret to distract himself from it all?  Helping his children with their homework.  How sweet.

The Padres wear camouflage alternates on Sundays at home to honor military vets.  They wore the camouflage alts for a special occasion this week, to honor those in the military for the successful assassination of Osama bin Laden.

Geoff Young at Baseball Prospectus points out the Rockies have taken the place of the Padres this April. Otherwise, the division has looked similar to 2010.

Injuries: Placed 2B Orlando Hudson on the 15-day DL with a strained hamstring. LHP Joe Thatcher had successful exploratory surgery on his shoulder on May 2. SS Everth Cabrera broke a the hamate bone in his right hand. OF Mike Baxter has started a rehab assignment in High-A.

You Should Know: Aubrey Huff hit a walk off home run in the tenth inning May 3 in extra innings. He became just the third player in the last 20 years to break an 0-for-20+ streak with an extra innings home run. (h/t Hank Schulman).

News: How funny. Barely a month ago, the Giants were a chic pick to win the NL Pennant. After all, they had just won the World Series and came into 2011 with largely the same roster, with more Posey/Bumgarner. Now everyone agrees the Giants are clearly a work in progress.  So which assessment is real? Given I agreed with the current appraisal, before the season, I will lean towards the latter.

Given the issues, Brian Sabean and Bruce Bochy has been doing a lot of discussing.  They have discussed promoting Brandon Belt, which would be smart.

The Giants haven't had anything more than a band-aid at shortstop since Rich Aurilia. The Mets will likely be trading Jose Reyes. The dots have been connected by too many writers to count, and it does make sense. Of course, the Giants have discussed trading for the Mets' shortstop, but nothing is immenent.

Tim Dierkes profiles the potential move. Reyes is a free agent after this season, so he is a rental player if San Francisco can't sign him to an extension. Even with that, the Mets figure to be demanding a top prospect (Zack Wheeler) or young MLB player (Madison Bumgarner). I can't see a deal consummated without one of those, and Sabean isn't going to want to deal either. The Mets get two first round picks when Reyes signs elsewhere after the season.

Such a move could be pushed through though via panic. Pablo Sandoval is on the disabled list, Miguel Tejada is struggling. The Giants won't cut bait with Tejada yet, as one month probably isn't enough to convince Sabean that he made a mistake in giving the aging "shortstop" $6million. But even if Tejada is gone or benched, the Giants would be forced to start at least two of Mike Fontenot, Emmanuel Burriss, and Ryan Rohlinger in the infield until Sandoval returns.

Injuries: Placed Pablo Sandoval on 15-day DL 4/30 with a broken hamate bone in his wrist. Sandoval had successful surgery on his wrist on May 3. He is due to return mid-June. Andres Torres started his rehab assignment last night and went 0-for-3 with a walk against Greg Reynolds and the Sky Sox. Barry Zito is able to put pressure on his foot but is still about three weeks away.