Ubaldo Jimenez came out a bit shaky, but overall positive, at least as far as I saw it. Ubaldo went 6 innings, striking out 7 and walking 5. It was a shutout until Mike Fontenot hit a triple into the angriest part of the park which pretty much guaranteed he'd score, and score he did. At that point in the game, it was 3-1, thanks to a Tulowitzki line drive homer to the LF stands and some well executed smallball type play to score another 2 runs. This all came off of Matt Cain. That makes me happy a little bit.

Everything looked alright with a 2 run lead when Rafael Betancourt took the mound. He induced a Mike Fontenot flyout, and then Buster Posey fisted one right over the infield. After Aubrey Huff struck out, Pat Burrell then doubled to CF, leaving runners at 2B and 3B with 2 outs.

JUST WHEN WE THOUGHT IT WAS ALL GOING TO BE ALRIGHT, Nate Schierholtz reached out and slapped a 95mph fastball on the black down the LF line to drive in both Posey and Burrell to tie the game.

The Rockies got nothin' off of Brian Wilson, which left the team with 2 choices for the bottom of the 9th: Closer Huston Street, and Not Closer Felipe Paulino.

The Rockies chose to go with Paulino.

I strongly disagreed with this decision, and I was proven right.

Before everyone jumps on the "HOW COULD YOU DO THIS JIM TRACY", it's not really HIS fault, per se. It's every manager's fault. If you don't get through the bottom half of the inning, there ain't gonna be no chance to make a save situation. Use your best guys first and then work your way down the ladder until you're out of guys. Why on earth do managers see the need save their best guys for a time which may not come?!

Anyhow, Paulino gave up a double on a line drive to Cody Ross, struck out Aaron Rowand with some nasty breaking stuff, and then Freddy Sanchez got a nice little dribbler right up the middle past Tulowitzki and Herrera to drive in Ross, blah blah blah Rockies lose. 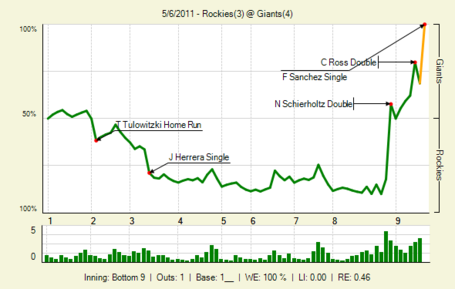 Guys who did good stuff:

Guys who weren't so great: