Rockies coming back to earth, lose to Giants. Again.

Share All sharing options for: Rockies coming back to earth, lose to Giants. Again.

The final score was 3-2. Clayton Mortensen pitched well for Colorado. The Rockies, however, had more GIDP's than were necessary, I think. Also I could have done without the whole contact play misery. And that Mike Fontenot guy. I mean, really, the Rockies lose because of the guy that couldn't beat Miguel Tejada for the Giants starting shortstop job?

At any rate. Todd Helton had two RBI, that was nice. The bullpen has been brought to the point of exhaustion too early in the season by the failure of starters to go deep, mismanagement , overuse and injury, that's not so nice. That aside, however, this is precisely the kind of game we should shrug off as fans. Early May, Mike Fontenot, at a hostile park, it's too easy to see the recent slump as part of a bigger impending doom, and who knows, maybe it is, but it could also just be another bump in the race track.

Go to bed, take a deep breath and let's get back up tomorrow. 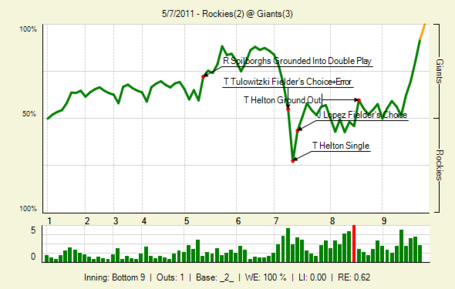