Here's all you need to know about the Rockies' road trip -- their starting pitchers allowed only 10 earned runs over 6 road games and 38 innings pitched (six quality starts) -- and Colorado went 1-5 in that stretch. Simply put, Colorado's offense (and to a lesser extent, the bullpen) decided not to travel with them to Arizona and San Francisco -- they only scored 16 runs all week. That's not making your mothers very proud, Rockies.

The Giants' sixth starter, Ryan Vogelsong (2-0), had a perfect game entering the sixth inning. In all, he allowed only one Chris Iannetta single a walk, and an error in his 6.1 IP. Colorado only was able to muster three hits all game, two by Iannetta and one by Carlos Gonzalez, all up the middle singles.

Jorge De La Rosa struggled a little bit with wildness (five walks and four hits in six IP), but he only gave up three runs and struck out seven men. Unfortunately, he got no run support whatsoever and took his first loss of the season (4-1).

The sweep (Colorado's third straight series loss) moved San Francisco to only one game behind the Rockies in the NL West. Blessedly, Colorado returns to Coors Field tomorrow for an eight game home-stand against the Mets, the Padres, and the Giants. 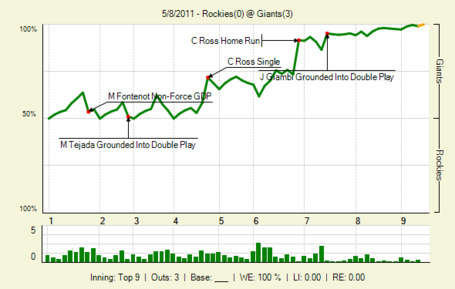 We Are Disappointed In: Everyone Else