The Rockies offense still resembles hot garbage, Jhoulys Chacin allowed six walks, and the baseball gods still largely frowned upon the guys in purple pinstripes. Still, it wasn't enough to stop the man only known as Doom from leading his club to a much-needed victory.

Chris Iannetta doubled, homered, and caught Willie Harris trying to steal in the ninth inning to help Colorado preserve a 2-1 victory over the New York Mets. Iannetta scored both runs in the game for the Rockies, with one obviously coming on his line drive homer in the seventh inning that probably didn't get higher than about 10 feet in the air. The other one came after he led off the fifth with a leg double into left-center and scored on a two-out hit by Dexter Fowler. Iannetta finished 2-for-3, while Fowler wasn't bad in his own right with a 1-for-2, two-walk night.

Chacin fought like a champ through six innings, walking six batters and striking out five. He only allowed two hits and an unearned run, though, as the Mets were never really able to make solid contact off of him. He had one particularly rough stretch in the top of the fourth when, with two outs, he loaded up the bases on a single and two walks in which none of the pitches were even close. However, after a visit from Bob Apodaca he was able to induce an inning-ending groundout off the bat of Josh Thole. The lone Mets run came after Chacin walked Carlos Beltran and allowed a single to Ike Davis. Jason Bay hit a ball at Ian Stewart, who wasn't going to throw home (thus, Beltran would've scored anyway), instead electing to get the out. Things didn't work out, as he threw the ball high, pulling Todd Helton off the base. The official scorer decided to say that the runner scored as a result of Stewart's error, keeping Chacin's rather sparkling 2.49 ERA intact.

Matt Reynolds, Matt Belisle, and Rafael Betancourt combined for two innings of scoreless relief and handed it over to Huston Street, who allowed a leadoff single on a check swing by Willie Harris. After Jose Reyes flied out for the first out of the inning, Harris elected to try to take second during Daniel Murphy's at-bat, only to be gunned down by CDI. Street then got Daniel Murphy to hit a grounder to Troy Tulowitzki, who made a nice diving play and threw to first to seal the game. 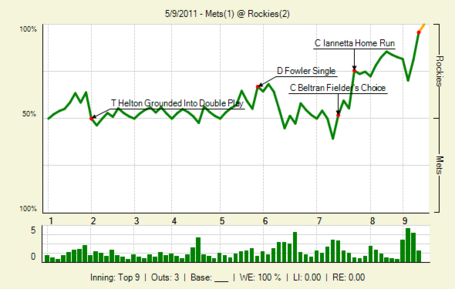