Okay, so maybe I have the story mixed up a little, but after struggling for much of 2011 to date, Ubaldo Jimenez pitched his best game of the season, one of the best of his career, in shutting out the Dodgers 3-0 in 106 pitches on Wednesday night. Jimenez held Los Angeles to four hits, struck out seven and walked none to earn his first win of the season.

The Rockies scored their three runs relatively early, with one each in the second through fourth innings. A Ty Wigginton triple followed by a Jose Morales sacrifice fly put Colorado on the board in the second inning. An inning later, they used a similar small-ball approach when Seth Smith led off with a double, advanced on a Jonathan Herrera sacrifice and then scored on a fly out by Carlos Gonzalez. The final run, however, used a more direct approach to home: a Todd Helton solo bomb off of John Garland deep to right field. In keeping with his odd year resurgence, Helton's seventh home run of the season leaves him just one behind his 2010 total and is also as many as he hit in all of 2008.

For the rest of the game, however, the Rockies success was almost all on Jimenez as the teams traded goose eggs for the final five frames. Ubaldo kept his velocity, his pitch movement and most importantly his command throughout the contest, getting his final K of the night on the last batter, Matt Kemp, to end the ninth and give the Rockies a much needed victory to keep pace with the divisional leaders heading into an important weekend series against San Francisco. 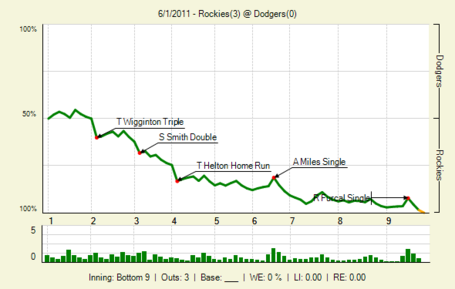