It's always fun to look back at drafts to criticize teams for who they passed over, especially when it involves allowing a divisional rival to have a superior talent.

No wait, that's no fun at all. Not in Colorado.

Half of the draft related pieces out there have their own angle at cautioning fans not to make snap judgments on the draft.

The other half help fans make those very snap judgements. 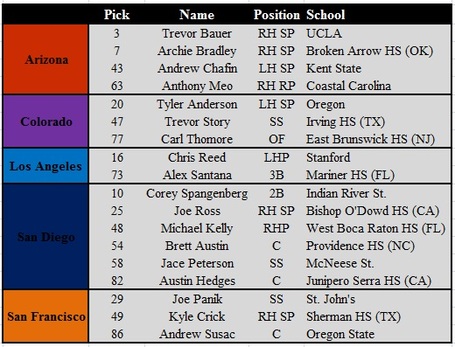 Arizona certainly appears to have done very well for themselves, picking up a Tim Lincecum-type college pitcher in Trevor Bauer and arguably the top high school pitcher in the country.

They were the first team in MLB history to have two of the top seven picks, and they didn't shy away from upside, even though their #7 pick was not protected. Despite being perceived as a strong candidate to attend Oklahoma University, Archie Bradley is throwing out plenty of signals that he plans on signing.

Those two are a great baseline for a franchise's rotation that already features youth in Ian Kennedy and Daniel Hudson. But don't forget the others in the minor league system. Tyler Skaggs is 3rd in the minor leagues in strikeouts, and he's just 19. The next highest 19 year old? Arizona's David Holmberg, who ranks 61st, quietly one strikeout behind Giants phenom 21 year old Zach Wheeler.

As for the other teams in the division, the Rockies and Giants took a comparable strategy to the top two rounds, selecting a "safe" lower ceiling higher floor type in the first round, then drafting for potential the rest of the first day. Tyler Anderson is a much better pick than Joe Panik, who Keith Law labeled as a utility infielder.

The Dodgers, hamstrung by an unfamiliar inability to sign a player above slot, took two players that were not rated as highly as they were drafted.

The Padres had by far the most picks in the top 100 in the division, and they leveraged that into aiming for upside. It's a gutsy strategy for a franchise who has failed at the top of drafts frequently, but it is smart to take advantage of an opportunity to dilute risk in acquiring upside talents.

Who acquired the best crop of talents in this draft? Let the record show Arizona is unanimously written as the winner in the division right now.  They've already agreed to terms with 23 draft choices, but in five years, it might be Colorado with the best draft.

You Should Know:  Arizona is the first team in MLB history to own two of the top seven picks in the draft.

News: Justin Upton leads the Diamondbacks in wRC+ with 132. That's not surprising. What is surprising is who is next. It isn't Kelly Johnson, or Chris Young, or Stephen Drew, or even the hot-hitting Ryan Roberts. It's Juan Miranda.  Jim McLennan wrote about the hush hush rise of Miranda.

Josh Collmenter continues to mow down opponents. His stuff may not be good, but his pitching motion and arm angle are so unorthodox that hitters cannot adjust. If you're starting to think he's legitimate, you might want to wait. In his 13 appearances, he has faced 12 different teams. The only team he has faced more than once was the Colorado Rockies, and the second time they saw him, he had his worst outing of the season, leaving in the fifth inning having allowed five runs (two earned), walking two and striking out one. Soon, every team he faces will be getting their second look.

Kevin Towers had the kind of offseason that would make a SABR-leaning fan cringe. He traded a middle of the order bat for relief help, acquired a bunch of old veterans and stressed the importance of the bullpen and team chemistry. But as AZCentral's Scott Bordow writes, it's working.

Kevin Stark writes that all but six teams inquired on Justin Upton in the offseason. Two such offers from American League teams "made a lot of sense" to CEO Derrick Hall, including acquiring Jacoby Ellsbury and Daniel Bard with prospects from Boston.

You Should Know:  Matt Kemp became the ninth player to have a double, triple and homerun in a game. Only two of those nine completed the cycle. Dee Gordon join Jose Offerman as the only Dodgers since 1919 to collect three hits and a stolen base in their MLB debut.  h/t Eric Stephen.

News:  Frank McCourt is going to be able to make payroll Wednesday, something that has been speculated about for weeks. There is no word on where the money has come from, but a spike in attendance isn't the correct answer.

Whenever the Dodgers get a new owner, he/they will not have a large bar to reach to be well-accepted off the bat. I imagine the organization being owned by a group including Steve Garvey and Orel Hershiser will go over particularly well.

The LA TImes' Steve Dilbeck is not pleased with Andre Ethier. He cites the relatively low five home runs and explains away a very good slash line by saying "for the No. 3 hitter in the lineup, nothing particularly special." For the record, his .886 OPS compares quite well with the league average OPS for 3-hole hitters: .764. In fact, if he played all the time, the Dodgers would be getting more production from the 3-hole than every NL team except Cincinnati and Milwaukee, and that's before park-adjusting the OPS. He's just four doubles off the MLB lead. Stand down, Steve. Ethier might be one of only two men anyone east of the Mississppi can name in the line-up, but he's not the problem.

Los Angeles felt they would start to heat up when they got healthy. They have activated a half dozen players from the disabled list in recent weeks only to place more there. It's what happens with an old roster. So if they can get going enough to rationalize it, Ned Colletti may try to acquire a piece for the line-up, preferably left field.

The former left fielder was top prospect Jerry Sands. After a lull to start his career, he took off with the bat, leading many to expect he would be fine. He bottomed out again, and the Dodgers demoted Sands last night before his OPS could fall below .600.  TrueBlueLA's meercatjohn remembers another prospect who fell apart after a whirlwind hot streak.

Many teams make late round picks with ties to the organization. The Rockies once drafted a son of owner Dick Monfort. This year, the Rangers drafted a paralyzed teammate of their second round pick. The Dodgers took a suchpick, grandson of Spanish announcer Jaime Jarrin, Stefan in the 40th round.

You Should Know:  The Padres are no longer the lowest scoring team in MLB. Their 222 runs scored is one more than the San Francisco Giants.

Divisional Change: Gained one game in the division.

This Week: Last 3 games of a 4 game home series vs. Nationals. 3 game road series vs. Rockies.

News: It's Anthony Rizzo time. Rizzo was acquired from Boston as one of three players for Adrian Gonzalez, and is now up to permanently start at first base, most of the time. Corey Brock has a feature on Rizzo up.

First round pick Cory Spangenberg is scheduled to take a physical today, which would indicate he is close to signing already. The Padres have hopes the infielder can buck a trend of first round failures, as San Diego has only one 1st round pick on their 25-man roster. For comparison, the Rockies (who have had issues in the first round) had four two days ago - Troy Tulowitzki, Todd Helton, Chris Nelson and Greg Reynolds.

Buster Olney writes that Heath Bell is sure to be traded, but Jed Hoyer could get a huge haul for also trading Mike Adams, who is under contract through 2012.

San Diego is apparently open to trading Ryan Ludwick to Cincinnati for Chris Heisey and prospects.

Dustin Moseley had an MRI yesterday after dislocating his shoulder. We don't know the results, but it appears he is on track to make his next start Monday at Coors Field.

Injuries: Activated C Nick Hundley from the 15-day DL (6/8). Placed RHP Luke Gregerson on the 15-day DL (6/9). Dustin Moseley injured his shoulder Wednesday swinging a bat in the game against the Rockies. He has not been completely evaluated yet.

You Should Know:  Since he debuted in 2005, no MLB pitcher has had less run support than Matt Cain. Who else would it be?

Divisional Change: Lost one half game off their lead in the division.

News: It's official. This is the Year of Buster Posey. He won't play again in 2011, but headlines will be forever tied to the baby-faced catcher, mostly in the form of "who the heck will catch for this team." Andrew Baggarly wrote that the Giants are looking harder for catching help after giving Eli Whiteside two weeks to predictably yawn through a dozen starts.

The catching help will not be Ivan Rodriguez, according to Bob Nightengale. Instead, the Giants have promoted High-A catching prospect Hector Sanchez from High-A San Jose in the California League, the same league as the Modesto Nuts, to AAA. There he is getting a crash course on defense, presuming his young bat has to be better than Whiteside at least already. For the record, Kevin Goldstein has Sanchez as the Giants' 20th prospect, behind Conor Gillaspie.

MLBTradeRumors' Steve Adams featured the insane journey of Ryan Vogelsong, who was traded from San Francisco to Pittsburgh for Jason Schmidt and is now San Francisco's most valuable player.

Not surprisingly, Giants fans were less than thrilled by their first round pick.

Bruce Bochy thinks Brandon Crawford will be a good MLB hitter now. Rockies fans might actually want to root for this, as it would discourage the Giants from trading for Jose Reyes.

Joe Pawlikowski predicts that the Giants will release Miguel Tejada when Pablo Sandoval comes off the DL in coming weeks. At that point, Tejada will have had nearly a half season to prove his roster spot worthy. With Crawford manning short decently and a good showing from Emmanuel Burriss, Bruce Bochy would be hard-pressed to put the former MVP on the lineup card.

Injuries: 1B Brandon Belt was placed on the 15-day DL with a hairline fracture in his left wrist (6/4). IF Mike Fontenot (groin) and Pablo Sandoval (wrist) started a rehab assignment last night with AAA Fresno. Barry Zito will make his second rehab start tomorrow night.

Lastly, Brian Wilson likes the booty shorts. You were dying to know.