Chris Nelson set up us the bomb

How are you gentlemen !!

All your base are belong to us.

You are on the way to blowing 6 run lead.

You have no chance to hold lead make your pitch.

Y'all are a bunch of damn nerds

Seriously though, if we can forget about the 9th inning snafu (PH homer by Matt Kemp, bunch of base hits on pitches that shouldn't have been hit anywhere out of the infield, throwing error on Chris Nelson which Helton was inexplicably absent to scoop), this was a great game for the Rockies.

After a massive come from behind win yesterday that resulted in a 9-7 win, the Rockies pounded Chad Billingsley for 6 runs in 5 innings of work, which was just excellent to see. As I noted in the original game thread post, the Rockies have hit Bills for nearly a 5 ERA before tonight's game, and they just kept punishing him for being the man he is in tonight's victory.

The Rockies aren't out of the woods yet, but they seem to have at least remembered that moss grows on the north side of trees. Maybe tomorrow they'll remember that they packed a compass, too, and will find their way back to .500. 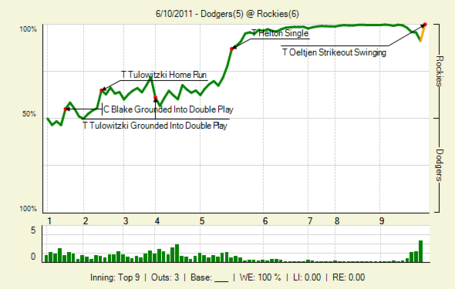 SDcat09 was 4 posts shy of double centurion. Highest post count after GmoRocks' 117 was ddavis539 at a whopping 52 (tied with me!).

Apparently people have lives now or something.