Rockies watch Dodgers take off before party's over, stay behind to clean up mess they made, don't quite succeed.

Share All sharing options for: Rockies watch Dodgers take off before party's over, stay behind to clean up mess they made, don't quite succeed.

In the end, responsibility for Saturday night's 11-7 loss to Los Angeles rested on the shoulders of nearly every Rockies player to participate in the night's game, and try as they might late to atone for their misdeeds, the damage done proved too much to come back from this time around.

Starter Jason Hammel kept on playing with fire, leaving seven Dodgers stranded in the first four innings before they finally broke through with a score in the fifth as a Matt Kemp double scored Andre Ethier (who was in scoring position thanks in part to a Troy Tulowitzki error) tying the game at one apiece. Then in the sixth, the floodgates started to open, as Hammel was forced to an early exit with a stiff lower back and Matt Reynolds couldn't stop the bleeding. Three runs scored that inning, and three more were tacked on an inning later off of Clayton Mortensen.

The Rockies scored first off a Ty Wigginton solo home run leading off the second inning. After that they had a solid opportunity for a rally in the fifth, loading the bases with one out for the second and third hitters in the night's lineup, Eric Young Jr. and Jason Giambi. Both popped out to kill the threat, and the Rockies wouldn't have another baserunner until the eighth, when they again loaded the bases, this time with zero outs and clean-up hitter Troy Tulowitzki actually taking advantage, knocking in Carlos Gonzalez and Young with a single. After a fly-out for Wigginton, Seth Smith continued the rally with a bloop single that turned into a three base trip (and two more runs) thanks to a Kemp error in center. He in turn was knocked in by a Charlie Blackmon single, but the rally stopped one short and Matt Lindstrom couldn't hold the Dodgers at seven in the next frame.

The Rockies would wind up scoring one more in the ninth, but could have had more had it not been by some great defensive work by the Dodgers and bad luck with where Young and Blackmon lined out to. After Gonzalez doubled, Young lined into a double play to pitcher, and then after a two out rally started by Jason Giambi scored a run and loaded the bases for Blackmon, a scorched line drive to left was snagged by Tony Gwynn Jr. to end the game. 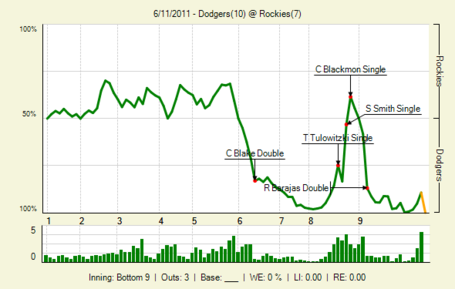