Not only did the Rockies lose to a guy named Rubby, they lost in somewhat embarrassing fashion despite hitting four homers (including three with men on base) thanks in large part to three errors. Ubaldo Jimenez (1-7) gave up three HRs for the first time in his career (including a James Loney grand slam), going only 5.1 IP and allowing 7 runs (only two of which were earned) on 11 hits (the Dodgers had 17 on the game), striking out two.

How were only two of seven runs earned? Thank Mr. Ty Wigginton, who booted an easy double-play ball early in the third that came back to bite the Rockies in a big way (five unearned runs) when Mr. Loney hit his two-out (yes, if you've done your math correctly, with the error Loney wouldn't have batted) grand slam -- and then another run got tacked on in the inning. Jimenez later gave up solo shots to Matt Kemp and Rod Barajas. Errors by Jose Morales and Todd Helton exacerbted the situation, one leading directly to a LA run. The Rockies' bullpen continued their forgettable series (27 hits, 5 walks, 19 runs allowed in 12.2 IP), giving up 3 runs in 3.2 IP today.

It started out well enough, as Seth Smith drove a first-inning three-run homer into the second deck (his 6th) to give the Rockies the early 3-0 lead. Unfortunately, by the time the Rockies got on the board again, in the bottom of the 7th on a 2-run Carlos Gonzalez homer (his 9th), it was already a six run deficit. CarGo's homer, followed soon thereafter by a 2-run shot by Troy Tulowitzki (his 13th), made it 9-7 after seven innings, but Colorado would get no closer, even with a Todd Helton solo shot in the ninth (his 9th, eclipsing his 2010 total already) making it 10-8. To their credit, the Rockies got the tying run to the plate, but Seth Smith couldn't repeat his first inning exploits, as Loney made a nice play on his screamer down the line.

There are still some encouraging signs to take away from this series, namely the fact that Colorado's offense finally decided to show up after taking a seven week vacation backpacking through Europe. In the four game series, the Rockies scored 30 runs, including an incredible 25 runs in the fifth inning or later. The Rockies still have six games left on this homestand (SD and DET), so let's hope that the offensive momentum from this series carries over against new opponents. 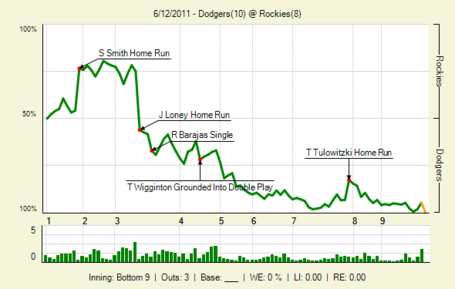 Cat had more than 3x the posts of anyone else.