Padres 3, Rockies 1: Back to the Same Old Script

Share All sharing options for: Padres 3, Rockies 1: Back to the Same Old Script

Did that series against the Dodgers really happen?  After scoring just 18 runs in 9 games (five in the last game), Colorado plated 30 runs in four games against Los Angeles.  Even after losing two to even up the series, fans had to at least take solace in a consistent offense.

Now, we are back to the same old script, and the Rockies have lost three consecutive games.  It played out as nearly every May game did.  Starting pitching was strong, the bullpen held the game close, but the offense was ultimately MIA as Colorado lost a close game.

Aaron Cook start was shaky at the start, as he allowed three consecutive singles (two as line drives) and a sacrifice fly to leadoff the game.  He would allow just one run on two hits the rest of the night until he was chased by a rain delay with two outs in the top of the sixth.

Matt Belisle worked 2.1 scoreless, and the Padres pushed a run across against Rafael Betancourt by virtue of a Cameron Maybin triple and two out infield single.  In all, it was just three runs allowed at Coors, something the pitching staff has not accomplished since May 25, a stretch of eight games.

Perhaps most telling is that Colorado's offense managed just one hit all game by a guy who was on the roster two weeks ago - a Carlos Gonzalez single in the fifth.  Chris Nelson pushed CarGo to second with a single, one of two times Nelson set up a runner in scoring position with less than two outs that would not score.  The other came as a one out double in the first inning.  Charlie Blackmon singled twice, drove in the lone Rockies' run and stole a base.

Oh, and by the way, this came against Anthony Bass, making his MLB debut after leaping from AA.  Todd Helton claims he was fooled by a hitch in Bass' delivery and a good slider, but there is no silver lining or hat tipping from me. 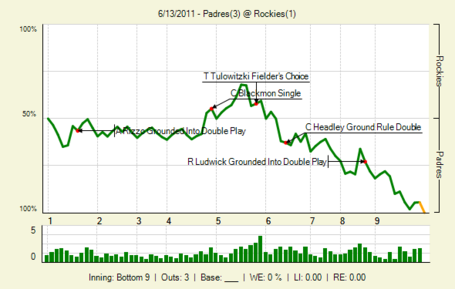