Tuesday Rockpile: Should Dexter Fowler Give Up Switch Hitting?

Share All sharing options for: Tuesday Rockpile: Should Dexter Fowler Give Up Switch Hitting?

This is not a new topic. It was actually first brought up by Troy Renck last Wednesday in April 2010, but it keeps coming back. Every time the Rockies' center fielder has a rough patch, the overwhelming solution voiced by the masses is for Fowler to abandon hitting from the left side, instead focusing just on his natural side, the right (wrong?) one.

It makes sense on the surface. Why continue to let him whiff needlessly if he hasn't learned after 2 1/2 years in the big leagues? With Charlie Blackmon potentially pushing the playing time for Dex out the window, something needs to be done. The suggestion of Fowler giving up switch hitting has always confounded me, but in particular, the timing now is most bewildering. Here are the reasons to scrap his switch-hitting:

Here are all the reasons not to abandon switch-hitting:

1) Dexter Fowler is 25 years old.  His growth curve is far from its peak.

2) As Grant Brisbee wrote last week, the precedent for MLB hitters dramatically improving after scrapping the switch-hitting is practically non-existent.

3) Fowler himself is not on board. Granted, proud players don't always know what's best, but the transition would work better if the player trusted the process.

5)  Left-handed hitters can use the bunt offensively better. Before you remind me he is a very poor bunter, please see #1. If he can utilize the bunt, his value as a leadoff hitter increases significantly.

6) Perhaps most ignored in all of this, Fowler is actually not demonstrably worse as a LHB. One would think his splits would be atrocious for this topic to get so much ink. Look for yourself:

Okay, but 2011 is a bit of a small sample size, right? He struggled batting left-handed last season, right...?

You might have caught yourself trying to decipher from those stats which side the Rockies thought of scrapping. That confusion is evidence in itself that his struggles from the left side are overstated. Granted, his strikeout rate has been higher as a left-handed batter. He has indeed had difficulty with the slider down and in, though that was the same reason we heard a year ago, and then he killed the ball from the left side in the second half. How? Maybe there's something else Fowler can change. 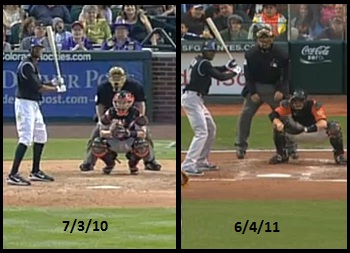 In fact, there is. Fowler's stance from the left side has slowly transformed completely. While struggling left-handed before his demotion in 2010, Fowler's hands were up high near his head. Upon his callup at the end of June, he had dropped his hands and opened his stance a bit, allowing him to reach the slider down and in. Remember that series? Fowler hit 10-for-16 with four triples, two doubles, seven walks and just two strikeouts in that series. That player is an awfully valuable hitter to have around.

At the time he was placed on the disabled list this season, his stance had closed entirely and his hands rose a good eight inches. He has been swinging over sliders down and in much more frequently as a result (check at 34 seconds). The difference is stark. Plus, the socks!

As far as I can tell, abandoning switch-hitting is almost a guarantee to weaken Dexter's game. The only apparent benefit, which is not guaranteed due to #4, is limiting strikeouts, but it appears that can be better remedied by watching tape from last July.

Of course, Charlie Blackmon has a chance to squelch any comeback attempt from Dex. He's just 7-for-27 (.259) with no walks and no extra base hits since his callup, but he has struck out just twice, stolen three bases and played great defense. The Blackmon/Fowler battle will be interesting to see, especially if Dex does the same thing this June in Colorado Springs that he did last spring.

Tracy was rewarded last night, as Ty Wigginton played flawless defense and did a strong Dexter Fowler Bobby Abreu impression by working a two-out walk, stealing a base and scoring the Rockies' only run on a single.

MLB Total Hits Per Game: Down Across the Board - Beyond the Box Score - A good reminder when evaluating the Rockies offense. It's still subpar, but it isn't as bad in reference to the league as it would have been in past years with those numbers.

The fact that umpires and catchers have a similar range of variation implies that playing with a receiver who is good at framing pitches is the equivalent of having a pitcher friendly umpire calling the game....the top catchers can win a ballgame per season (even playing fewer than 100 games) only with the skill of framing pitches....which is the equivalent of trading Alex Rodriguez's 2010 bat (.270/.341/.506, 30 HR, 125 RBI, 19 runs above replacement) with Alex Rios' lumber in the same year (.284/.334/.457, 11 HR, 45 RBI, nine runs above replacement).