Every ballpark has their standard fare: Peanuts, Cracker Jack, Hot Dogs, Burgers, and Nachos. Coors Field is no exception to this rule. We covered the Helton Burger a couple of weeks back, so now we move forward to the next fantastic item for purchase at Coors Field:

Now, the initial reaction is "big whoop, nachos, every park has them".

If that's your initial reaction, you're thinking of your standard plastic tray of chips with nacho cheese drizzled across the tray and a few sad looking jalapeños scattered across the top for a bit of spice.

Maybe you're thinking of some weird crumbly-ground-beef concoction with virtually no flavor that just ends up on your shirt anyhow and tastes like paste.

The Monster Chicken Nachos at Coors Field are quite possibly the best item in the ballpark.

Click past the jump and find out just WHY they're so great.

For starters, you get a tray that's about 3 inches deep and the size of an iPad.

After that, you get the thing buried in tortilla chips.

Next step is pulled chicken simmering in spices and absolutely tender - no chewing on some rubber poultry that some establishments may try and pass off as chicken.

After that, you get delicious pinto beans to add some more oomph to the overall meal that is this tray of Monster Nachos. Take that however you need to. I, personally giggled like an idiot.

Next step is the cheese. I will admit that this is the only really routine part of these monster nachos, as it's the same cheese sauce we're all familiar with: cheesy, with a bit of spice to it, but nothing to write home about. But when it mixes with the chicken and bean seasoning, it ends up working out better than expected.

Finally, the vegetable content. Yes, there are generic jalapenos to throw on top, very exciting. Whatever. But it doesn't end there.

You have 2 different options for Salsas (possibly more): there's a picante sauce style, which is more like what we're accustomed to out of the bottle at home, very much a spicy sauce if you're not into giant chunks of onion and pepper on your meal. Your second option, however, is a whopping serving of fresh cut pico de gallo - diced onions, pepper, cilantro, and other deliciousness (if that's your bag).

If you're really crazy, as Mr Matt Muzia is, you can then juggle your tray of Mexican Magnificence over to the hot dog fixin's and dump more onions on your nachos, if all the available options weren't enough.

For the same price as a packed burrito at Chipotle, you can get a Chipotle-sized serving of Nacho deliciousness at the ballpark. You usually expect to pay 100% markup on ballpark food, but to find something that will fill you like a meal should and costs much less than you'd expect to pay, it's clear that the Monster Chicken Nachos at Coors Field are the best ballpark deal around.

So are you heading to the ballpark and hungry? Get down and get dirty with a nice platter of the Monster Chicken Nachos. You won't regret it. 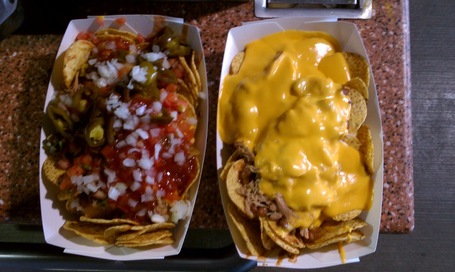