After a stellar MLB debut, Juan Nicasio had turned in progressively less impressive starts.  Making his fourth start on the same night Esmil Rogers made a rehab start in AAA, it didn't start well for Nicasio.  The Dominican hung his first slider of the game to leadoff hitter Chris Denorfia, who hit it over the bullpen wall for an immediate 1-0 deficit.  Nicasio then hit Jason Bartlett on a 1-2 pitch and allowed him to steal two bases.

Standing on the mound at Coors Field, that is where a lot of rookie pitchers have shriveled.  With just 12 career starts above A-ball, one would hardly fault Nicasio for doing so.  But aged 24 years, Nicasio trusted his stuff and struck out the next three hitters.

Aside from two doubles in the fourth that led to a run, Nicasio was sterling the rest of the night.  He struck out NINE Padres in innings, including Ryan Ludwick three times.  The nine Ks are the high-water mark for punchouts by any Rockies' pitcher in a game this season.  Compare that to the nine strikeouts he had in his previous three MLB starts combined, covering 18 innings.

It is safe to say Juan Nicasio is asserting himself as a mainstay in an MLB rotation early on.

The offense struggled to get on the board early against Wade LeBlanc, whose only strikeouts were Ryan Spilborghs and Nicasio.  There were several line drives, and in the fourth inning, they started falling.  The first five Rockies reached base, with a walk (Chris Nelson), three singles (Todd Helton, Ty Wigginton and Charlie Blackmon) and double (Troy Tulowitzki) plated three runs.

Chris Iannetta added a three run home run, tying him with Brian McCann and Miguel Montero with the NL lead in home runs by catchers with nine. 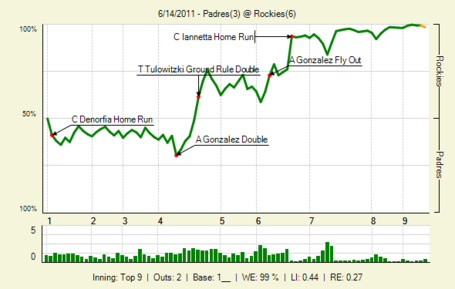