The Machine doesn't care for your worship. The Machine knows only its objective: Rockies victory

Share All sharing options for: The Machine doesn't care for your worship. The Machine knows only its objective: Rockies victory

If you go to Baseball Reference's play index and look up the Rockies career Adjusted ERA+ (a measure of a pitcher's ERA as a percentage compared to league average) leaders among starting pitchers with a minimum of 200 IP, you'll be greeted with the following ranking:

This was before today's start by Chacin, meaning that gap he's made over every other Rockies starter to date will only widen.  Also before today's start, Chacin ranked fourth in the National League (behind Jair Jurrjens, Roy Halladay and Cole Hamels) in 2011 ERA+ at 153. If he had the 1000 innings to be listed among the active career leaders in the category, he'd be tied with Brandon Webb for second place on the list. Today against the Padres, Chacin allowed just one run on three hits, walked two and struck out seven. Seven of ten outs on balls in play were on the ground. Through 241.1 career innings with the Rockies, Jhoulys Chacin is pitching like a bona fide ace. Not a solid number two to Jimenez, not a guy that will just go out and give the team a chance to win more often than not, he's the stopper. He's the guy that keeps the Rockies from sinking when their offense can't buy a hit.

All the while as he progressed through the minors I would hear all the reasons why Chacin just couldn't be that guy. He doesn't have a true out pitch. All his stuff is pretty good, nothing's great. And yet here he is, he's that guy, he's been that guy almost from day one. So before the game started, I posted a link to a fantasy writer who analyzed Chacin's pitches to declare his start this season a fluke. Since that article has been posted, Chacin's pitched fourteen innings at Coors Field, allowed just one run, struck out 16 Dodgers and Padres and given up five hits and five walks. What do you think I would tell you to believe? He's beating teams so many different ways right now, that he can lose command of a pitch, even two, and still find a way to pull out a quality start or better. And did I mention that he's just 23 years old? Simply put, Chacin's greatest ability is a preternatural understanding of how to pitch, how to adjust, hitter to hitter, game to game, situation to situation. I really don't know where else to classify him. He's the Rockies ace right now. I think he's going to be it going forward.

Elsewhere, Charlie Blackmon added three more hits and another stolen base to his running tally since getting called up from Colorado Springs. He scored a run and added an RBI in the Rockies pivotal five run sixth inning. Perhaps the most notable contrast for Blackmon from Dexter Fowler would be the three strikeouts in 35 AB's thus far, which is the kind of contact that will typically lead to a stretch like his, where Blackmon's had four multi-hit games out of nine played. Two aspects of his game that haven't really manifest yet are his gap power and his ability to also take a walk every now and then, but his performance at the plate and on the basepaths has been the kind of spark you get the feeling that Jim Tracy has been looking for.

So for the second day in a row, the Rockies beat the Padres 6-3, riding the arm of a starting pitcher under 25. This time the offense did it more with bloops and a five run station to station rally in the sixth. The bullpen was a bit shaky. End result: 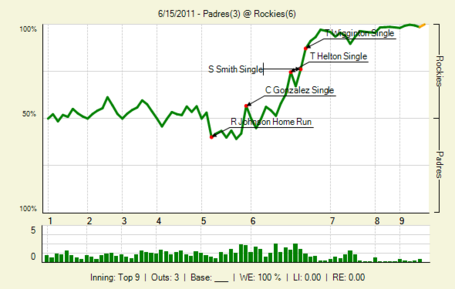