Rockies Game #69 Wrap: Chris Nelson Has Been Freed Along With The Bats

Share All sharing options for: Rockies Game #69 Wrap: Chris Nelson Has Been Freed Along With The Bats

Chris Nelson only had one hit on the night, but boy oh boy was it a doozy.

With 2 on and 2 out in the 2nd inning, Chris Nelson took a 2-2 pitch (seriously, I can't make this up) and drilled a liner to left field that cleared the wall for his first Major League home run.

That homer of Nelsons capped a 6-run 2nd inning for the Rockies in what would turn out to be a complete bloodbath at the expense of Detroit pitching. The Rockies scored runs in 5 of the 9 innings played after starting out the 2nd inning down 1-0.

Rick Porcello clearly didn't have his best stuff, as he lasted only 3 innings, allowing 8 hits, 2 walks, and 9 runs (6ER), exiting after only 58 pitches.

It's a good thing that the Rockies brought their big boy bats tonight, as starter Jason Hammel was also off of his game. In his 6.1 innings of work, Hammel tossed 102 pitches, allowed 8 hits as well, struck out 2, walked 4, and gave up a grand slam to Jhonny Peralta in the 6th. Matt Belisle finished the 7th for Hammel and pitched a scoreless 8th, and Clayton Mortensen finished the game for the Rockies, allowing 2 hits and no runs in his inning of work.

Top performer in the game was Charlie Blackmon, who continues to build on his strong start and impress everyone watching with slick defense in LF, and a 4-for-4 night with 2R, 2RBI, raising his season average to .410 (.846 OPS). Helton, Cargo, and Smith all tacked on 2 hits of their own. The only players to not get a hit were pitchers Jason Hammel (who walked) and Matt Belisle.

GREAT way to start the series, especially one expected to be full of tough pitching matchups. Verlander still looms, but let's see if the Rockies can take the series before Justin Verlander even takes the mound. 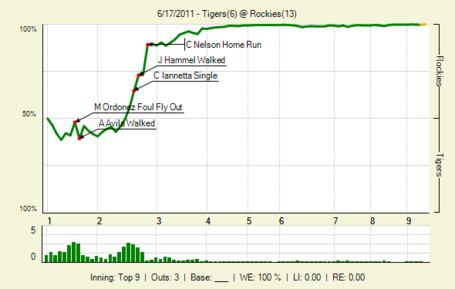