Let me catch you up to speed with our story thus far, taking off from where we left our intrepid heroes after the last chapter.

Ubaldo Jimenez also hit a two run single that was crucial to help give the Rockies an early 3-0 lead in the second. Carlos Gonzalez also helped that with an RBI single of his own.

But then, in a shocking twist, Ubaldo suffered a calf cramp that caught up to him in the sixth. He leaves, Matt Lindstrom allowed his inherited runners to score. WHAT ON EARTH WERE THE ROCKIES TO DO?

Never fear, Ty Wigginton (RBI double) and Chris Nelson (solo HR) provided the Rockies other two runs. For Nelson, it was his second career home run, his first coming a couple pages back in the last chapter.

Charlie Blackmon only got on base once this time, but still scored. Also, he and Gonzalez did some nifty things in the outfield to help the cause.

Matts Belisle and Reynolds and Rafael Betancourt of the bullpen pitched well to hold on to the lead. Huston Street walked a two out tightrope and saw that lead narrow, but the Rockies wound up winning anyway, 5-4, and will have a chance to sweep the Tigers in tomorrow's episode.

WOOT FOR INTERLEAGUE PLAY! By the way for those of you who remember how poorly the Rockies fared against the A.L. for most of the early history of Interleague play, you might be surprised/relieved as I am that they finally once again are at .500 overall against the AL in team history at 105-105. That includes a 22-10 record against the AL the last three years. 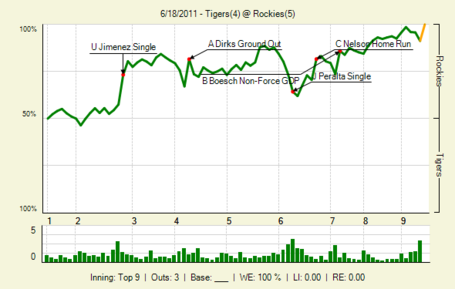